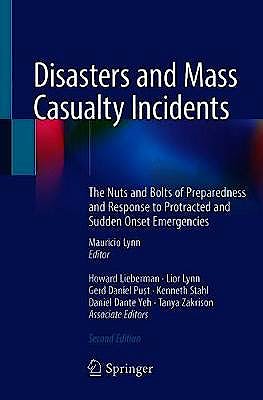 Disasters and Mass Casualty Incidents. The Nuts and Bolts of Preparedness and Response to Protracted and Sudden Onset Emergencies

Mass Casualty events may occur as a result of natural or human-caused disasters or after an act of terrorism. The planning and response to disasters and catastrophes needs to take into consideration the distinction between progressive and sudden events. Insidious or slowly progressive disasters produce a large number of victims but over a prolonged time period, with different peaks in the severity of patients presenting to the hospital. For example, radiation events will produce a large number of victims who will present days, weeks, months, or years after exposure, depending on the dose of radiation received. The spread of a biological agent or a pandemic will produce an extremely high number of victims who will present to hospitals during days to weeks after the initial event, depending on the agent and progression of symptoms.

On the other hand, in a sudden disaster, there is an abrupt surge of victims resulting from an event such as an explosion or a chemical release. After the sarin gas attack in a Tokyo subway in 1995, a total of 5500 victims were injured and required medical attention at local hospitals immediately after the attack. The car bomb that exploded near the American Embassy in Nairobi, Kenya, killed 213 people and simultaneously produced 4044 injured patients, many requiring medical care at local hospitals. The Madrid train bombing in March 2004 produced more than 2000 injured victims in minutes, overwhelming the city's healthcare facilities. More than 500 injured patients were treated at local hospital after the mass shooting in Las Vegas. Finally, earthquakes may produce a large number of victims in areas in which the medical facilities are partially or completely destroyed. Sudden events bring an immediate operational challenge to community healthcare systems, many of which are already operating at or above capacity.

The pre-hospital as well as hospital planning and response to sudden mass casualty incidents (SMCI's) is extremely challenging and requires a standard and protocol driven approach. Many textbooks have been published on Disaster Medicine; although they may serve as an excellent reference, they do not provide a rapid, practical approach for management of SMCI's.

The first edition of "Mass Casualty Incidents: The Nuts and Bolts of Preparedness and Response for Acute Disasters" dealt exclusively with sudden mass casualty incidents. The second edition will expand its focus and include planning and response for insidious and protracted disasters as well.
This new book is designed to provide a practical and operational approach to planning, response and medical management of sudden as well as slow progressive events. The target audience of the second edition will be health care professionals and institutions, as well as allied organizations, which respond to disasters and mass casualty incidents.

This new book will be a comprehensive tool for healthcare professionals and managers and should perform demonstrably better in sales and downloads. It will be of value at the pre-hospital as well as the hospital level, to plan and respond to the majority of catastrophes and mass casualty incidents.