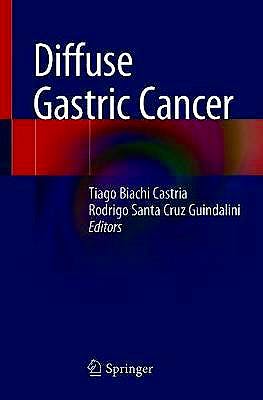 1. Introduction
2. Epidemiology
3. The role of Endoscopy
4. Pathology and Molecular Biology
5. Genetic Predisposition and Hereditary Syndromes
6. The Role of Surgery
7. The Role of Radiotherapy
8. The Role of Chemotherapy

We live in an era of personalized medicine and the knowledge about pathophysiology of diffuse gastric cancer has had many advances. Thus, the role of this work is to clarify what is new from diagnosis to treatment of this disease in order to treat patients in the most tailored manner as possible.

Rodrigo Santa Cruz Guindalini. He pursued his medical degree (2000-2005) and did residency in Internal Medicine (2007-2009) at the Federal University of Sao Paulo (Brazil). Completed his Clinical Oncology fellowship (2009-2012) and attained the PhD degree in the field of Cancer Genetics (2012-2016) at the School of Medicine of the University of Sao Paulo/State of Sao Paulo Cancer Institute (FMUSP/ICESP) (Brazil). In the years 2012/2013 was a fellow at the MacLean Center for Clinical Medical Ethics and visiting scholar at The Center for Clinical Cancer Genetics and Global Health of the University of Chicago (USA). He is currently a postdoctoral research fellow with primary focus on hereditary cancer syndromes at the FMUSP/ICESP. In addition, he is the head of the Portugues Hospital/CLION Cancer Center (Brazil) and coordinator of the Center for Genetics and Cancer Prevention of Grupo CAM (Brazil).