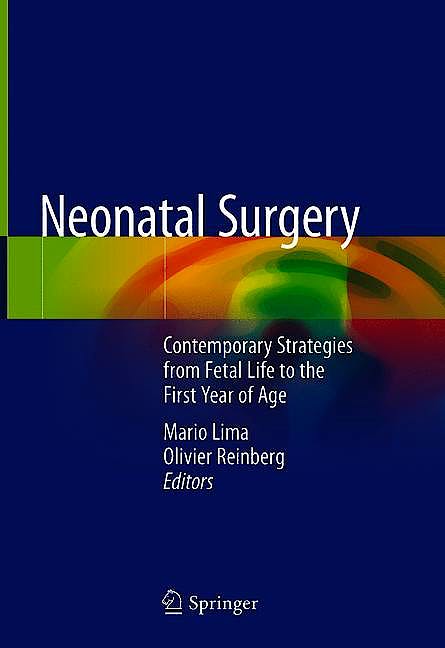 Neonatal Surgery. Contemporary Strategies from Fetal Life to the First Year of Age

This comprehensive, up-to-date reference on surgery in the neonate presents and explains the latest developments in the diagnosis and treatment of neonatal malformations and surgical pathologies. The coverage includes conditions involving the head and neck and the chest, disorders of the liver and biliary tract, gastrointestinal disorders, genitourinary conditions and malformations, anterior abdominal wall defects, tumors, and various other pathologies. For each condition, the pathogenesis and the most current and innovative surgical, and also medical, approaches are described with the aid of numerous illustrations. Minimally invasive strategies receive particular attention, and tips and tricks that will be of value in clinical practice are highlighted. The book includes a general part covering topics such as embryology, anatomy, prenatal diagnosis, and anesthesia and also provides detailed advice on pre- and postoperative care, with special consideration of nutritional problems. Neonatal Surgery will serve as an excellent guide for all pediatric and neonatal surgeons, whether in training or experienced

Mario Lima is Full Professor at the University of Bologna and Director of the Pediatric Surgery Unit at the "Policlinico S.Orsola-Malpighi" hospital of Bologna. He is Director of the Graduate School for Pediatric Surgery at the University of Bologna. Author of over 600 scientific publications and 38 monographs, he performed over 5000 surgical procedures as first operator. He is known internationally for the use of mini-invasive techniques in thorax, abdominal, genital and urinary surgery, both in neonates and children. He is past deputy Dean of the Faculty of Medicine and Surgery of the University of Bologna, and past Dean of the integrated Department of children, adolescent and women's health of the "Policlinico S. Orsola-Malpighi" and President of the Medical and Surgical Society in Bologna, Italy.

Olivier Reinberg, now retired, was Professor of Pediatric Surgery at the Department of Pediatric Surgery of the University and University Hospital of Lausanne, Switzerland. He was the head of the pediatric surgical emergencies from 1989 up to 2003. He has been a pioneer in pediatric minimal invasive surgery (MIS) since the beginning of the '90s, developing experience and practice in very small infants and newborns performing new procedures such as diaphragmatic plications (1997), esophageal atresia (1997), congenital diaphragmatic hernia (1998) and many other new procedures. He is also internationally known for his expertise in esophageal surgery with a personal experience of more than 300 esophageal replacements in children. He was involved in educational and surgical missions in Africa for more than 20 years. He is member of numerous scientific and medical organizations, Member of the French Academy of Surgery, and has been honored by numerous prices and University Distinctions, including several times the winner of the Medicine Teaching Awards by the medical students in Lausanne.