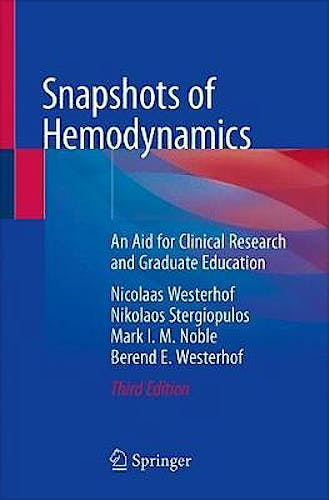 Snapshots of Hemodynamics. An Aid for Clinical Research and Graduate Education

This new edition is written in the same quick reference style as its predecessor to help clinical and basic researchers, as well as graduate students, understand hemodynamics. Hemodynamics makes it possible to characterize, in a quantitative way and often with noninvasive techniques, the function of the heart and the arterial system, individually and in combination.

Snapshots of Hemodynamics provides a thorough grounding in the discipline that will help any medical professional and researcher in the field. The authors have designed each chapter such that it gives a succinct overview of individual topics in a concise and understandable format. Each chapter of this new edition has been extensively updated while new chapters have been included on pulmonary hemodynamics and wave intensity analysis. The new edition presents the newest current information on hemodynamics in this ever-changing field.

Nicolaas Westerhof is a Professor Emeritus of Physiology based at VU University Medical Center, Amsterdam where his fields of interest include cardiovascular hemodynamics. He received his Ph.D. from the University of Pennsylvania, Philadelphia, PA. He was director of the Institute for Cardiovascular Research at VUMC (now Amsterdam Cardiovascular Sciences). Nico Westerhof is a knight in the Order of the Lion of the Netherlands. He received an Honorary Doctorate from the Ecole Polytechnique Federale de Lausanne, Switzerland; the `Oeuvre-prize' of the Netherlands Society of Physiology and the `Lifetime Achievement Award' of ARTERY Society.

Berend E. Westerhof is interested in the quantitative description of the cardiovascular system including the hemodynamics of the systemic- as well as the pulmonary circulation. His further interests include hemodynamic monitoring, signal analysis and the use of mathematical modeling. He received his M.S degree of Delft University and Ph.D. from the University of Amsterdam. He worked several years in industry and is presently back in academia.