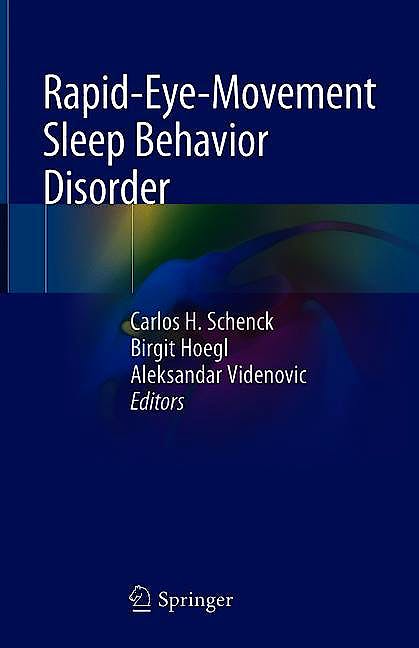 This book describes a sleep disorder belonging to the category of parasomnias (i.e. the sleep behavioral and experiential disorders) characterized by abnormal vocal and motor behaviors in the context of vivid dreams and loss of the customary muscle atonia during the stage of sleep called REM sleep. REM-atonia - one of the defining features of REM sleep, along with rapid-eye-movements and a highly activated brain state - serves a protective function, preventing the dreamer from acting-out dreams. REM sleep behavior disorder (RBD) was first described in 1986 by Schenck and colleagues; since then the understanding of the condition has increased exponentially also pointing out its strong association with the development of neurodegenerative disorders characterized by alpha synuclein deposition, such as Parkinson's disease, Dementia with Lewy bodies, and Multiple System Atrophy. Furthermore, RBD is now considered one of the earliest markers of ongoing alpha synuclein neurodegeneration, and provides a window of opportunity for testing disease modifying therapies that may slow down or halt the progression of these disorders for which there is currently no cure.

Additionally, RBD is to day known to be present in more than 50% of patients with narcolepsy-cataplexy, and can also be triggered by the most commonly prescribed antidepressant medications (e.g. SSRIs, venlafaxine). RBD has been documented as occurring, with variable frequency, with virtually every category of neurologic disease and has also helped expand the field of dream research.

The volume Editors have pioneered scientific and clinical advances in the field and, partnering with leading sleep clinicians and researchers on this book, have produced an invaluable guide to specialists in sleep medicine, neurology, psychiatry and psychology. There are also strong contributions in this book by leading basic science researchers, and so this book should also appeal to neuroscientists. As stated in the book, "RBD is situated at a strategic and busy crossroads of sleep medicine and the neurosciences. RBD offers great breadth and depth of research opportunities, including extensive inter-disciplinary and multinational research opportunities...RBD is an 'experiment of Nature' in which knowledge from the study of motor-behavioral dyscontrol during REM sleep, with dream-enactment, has cast a broad and powerful light on a multitude of Central Nervous System disturbances, their evolution, and their comorbidities."

Carlos H. Schenck received his B.A. degree from the Johns Hopkins University in 1972, and his M.D. degree from the State University of New York at Buffalo in 1976. He completed a Psychiatry Residency at the University of Minnesota in 1980, where he is currently a Professor and senior staff psychiatrist at the Hennepin County Medical Center (HCMC) in Minneapolis. Since 1982 he has been on staff at the Minnesota Regional Sleep Disorders Center located at HCMC. In 1985-7 Dr. Schenck and colleagues reported on a new category of parasomnia that they named RBD (REM sleep behavior disorder). In 1996 Dr. Schenck and colleagues first reported that RBD commonly heralds future parkinsonism, thus initiating a major international research effort in this area. Dr. Schenck and colleagues also identified and named Sleep Related Eating Disorder in 1991; formulated the first classification of Sexsomnia (abnormal sexual behaviors accompanying sleep) in 2007; identified Sleep-Related Dissociative Disorders in 1989; identified Status Dissociatus (mixed states of REM sleep, Non-REM sleep and wake) in 1991; identified Epic Dream Disorder in 1995; and identifed and named Parasomnia Overlap Disorder (RBD linked with Sleepwalking and Night Terrors as Non-REM sleep parasomnias) in 1997. Dr. Schenck was a founding member (along with Mark W. Mahowald, M.D., and Michel Cramer Bornemann, M.D.) of Sleep Forensics Associates, which has been an active educational and forensics resource for medical-legal cases involving the Parasomnia Defense (in particular, Sexsomnia and Sleepwalking). They have published on new sleep medicine forensic categories, including Parasomnia Pseudo-Suicide in 2003.

Dr. Schenck and his colleague Mark W. Mahowald, M.D. received the "William C. Dement Academic Achievement Award" from the American Academy of Sleep Medicine in 2007 for their research on the Parasomnias; and they received the Sleep Research Society "Outstanding Scientific Achievement Award" in 2010, and the "Sleep Science Award" from the American Academy of Neurology in 2017 for their discovery of RBD and for identifying the strong link of RBD with parkinsonian disorders. Dr. Schenck was Co-Chair of the Parasomnias Committee for The International Classification of Sleep Disorders-2nd Edition (ICSD-2, 2005), and was a member of the Parasomnias Committee for the ICSD-3 (2014). He is an Associate Editor of the journal Sleep, he is on the Editorial Board of the journal Sleep Science, and he is the North America representative of the World Sleep Society. Dr. Schenck was the Inaugural President of the International RBD Study Group that has held yearly research symposia since 2007.

Birgit Hoegl, MD is an Associate Professor of Neurology at Innsbruck Medical University. She is also a board certified sleep specialist and Director of the sleep disorders unit and sleep research group at the University since 1999. Dr. Hoegl has received her medical education at the Technical University Munich, Germany, and underwent resident training in Munich, Germany. In the 1990's, she was a clinical research fellow on Parkinson's disease and sleep with Prof. Dr. Gershanik in Buenos Aires, Argentina, and later with Prof. Dr. Claudia Trenkwalder at the Max Planck Institute of Psychiatry in Munich, Germany. She has served as President of the European Restless Legs Study Group (EURLSSG), Treasurer of the World Association of Sleep Medicine (WASM), Secretary of the International Restless Legs Study Group (IRLSSG), President of the Austrian Sleep Research Association (OEGSM/ASRA), and has been designated President of the World Sleep Society to serve from 2019-2021. Dr. Hoegl has published more than 250 scientific manuscripts, review articles, and almost 40 book chapters on RBD, RLS and other sleep disorders. She is an Associate Editor of the Journal of Clinical Sleep Medicine, Section Editor of Somnology, and Editorial Board member of Sleep Medicine. Her current Hirsch index is Google scholar 55, and 47 in Web of Science. Dr. Hoegl's research has been funded by Austrian Research Funds FWF, National Bank of Austria, and the Government of Tyrol, Austria. She has also been the coeditor of sleep books.

Aleksandar Videnovic, MD, MSc is an Associate Professor of Neurology at Harvard Medical School, and Director of the Division of Sleep Medicine and Program on Sleep, Circadian Biology and Neurodegeneration at Massachusetts General Hospital in Boston, Massachusetts, USA. His clinical activities include the diagnosis and treatment of a wide spectrum of movement disorders and co-existent sleep dysfunctions associated with these disorders. His research programs are focused on the interface of sleep, circadian biology and neurodegeneration, with an emphasis on movement disorders and REM Sleep Behavior Disorder (RBD). His other research areas of interest are clinical trials in movement disorders. Dr. Videnovic's research has been supported by NIH/NINDS, Michael J Fox Foundation for Parkinson's Research, National Parkinson Foundation, American Brain Foundation and Parkinson's Disease Foundation. Dr. Videnovic has served as Secretary of the International RBD Study Group, Member of Science Committee of the American Academy of Neurology (AAN), Chair of the Research Program SubCommittee of the AAN, and Chair of the Parasomnias Section of the American Academy of Sleep Medicine.