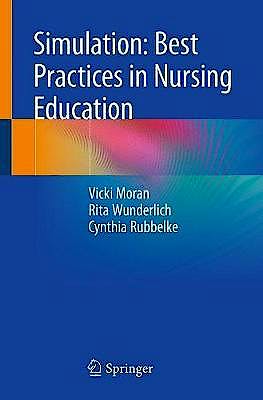 This book focuses on evidence-based standards for simulation in nursing education. The foundational principle of simulation excellence and its relevance to nursing is defined and infuses throughout the book. It also discusses necessary components for quality simulation from development to implementation. These areas include (but are not limited to): theoretical background, accreditation and approval standards, the simulation environment, developing and implementing simulations, and debriefing. These subject areas are approached following a thorough review of the literature and current practices identified from the International Nursing Association for Clinical Simulation and Learning (INACSL), Society for Simulation in Healthcare (SSH), National League for Nursing (NLN) and State Boards of Nursing. This quick reference title will become the best practice standards for simulation excellence in nursing education.

Dr. Vicki Moran graduated with degrees from Saint Louis University, BSN in 1994, MSN/MPH in 1997 and PhD in Higher Education Leadership in 2015. She has taught for over 15 years as didactic and clinical faculty in a variety of levels in pre-licensure nursing programs. She is clinically competent in a variety of critical care settings including trauma. Her meshing of clinical and education has developed a research focus on NCLEX-RN success of the pre-licensure student. Her simulation background and experience has contributed to nursing education. She has consulted with a variety of nursing schools to infuse simulation across nursing curriculum.

Dr. Rita Wunderlich began her career as a nurse in the intensive care, followed by becoming a nurse educator. She continued her educational trajectory by completing her PhD in Nursing in 2000. Shortly thereafter, she expanded her academic career into an administrative role. She is currently an associate professor of nursing at Maryville University in St. Louis, teaching at all levels of nursing education including pre-licensure BSN, MSN, and DNP programs. Her simulation background and experience has contributed to nursing education. She has used simulation extensively across the nursing curriculum for the past 15 years using the most current and evidence-based practice. In addition to being a nurse and an educator, Dr. Wunderlich has held multiple grants, provided extensive input to a number of academic committees, and is an established contributor to nursing publications.

Cynthia Rubbelke is an Assistant Professor and the e-Technology Coordinator at Saint Louis University School of Nursing. In her current position she manages learning technologies within the School of Nursing. She has been involved in nursing simulation for the past 10 years. During that period, she has consulted on 3 separate expansions of the School of Nursing Clinical Simulation Lab, including simulated hospital and home environments. She manages all the equipment and technologies utilized to deliver medium and high-fidelity simulations within the institution. One of her major accomplishments includes development of a simulated electronic health record and medication barcode scanning system. She has published her work in this area and has presented it at international conferences.