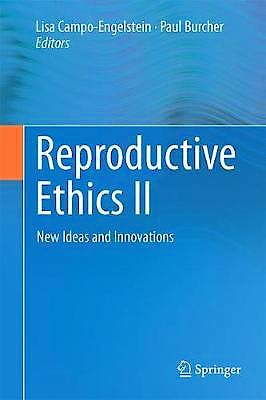 Introduction.- Part 1: Genetics, Eugenics, and Reproduction.- Frankenstein and the Question of Children's Rights after Human Germline Genetic Modification (Eileen Hunt Bottling).- The Ethical Complexity of Using Whole-Exome Sequencing to Detect Adult-Onset Conditions in the Prenatal and Pediatric Settings (Jennifer Murphy and Jazmine Gabriel).- Creating a Higher Breed: Transhumanism and the Prophecy of Anglo-American Eugenics (Susan B. Levin).- Part 2: Exploring Infertility and the Right to Reproduce.- One is the Loneliest Number: How the WHO's Redefinition of Infertility Provokes Contestations of the Body and the Body Politic (Nicholas R. Brown).- Medicalization of social infertility: Access to assisted reproductive technology with an expanded medical definition of infertility (Weei Lo and Lisa Campo-Engelstein). Social Responses to the Environmental Impact of Reproduction in the Global West: A Critique of Christine Overall's "Overpopulation and Extinction" (Philipa Friedman).- Part 3: Reflections on Assisted Reproductive Technologies.- Decentering whiteness in feminist bioethics: assisted reproductive technologies (ART) as an illustrative case (Karey Harwood).- New Pitchforks and Furtive Nature (Daniel P. Maher).- Assisted Reproductive Technology & the Proliferation of Parents: The More, the Merrier? (Greg Yanke).- Part 3: Reproductive Perspectives, Practices, and Education.- Reconceiving the human fetus: Perspectives from bioarchaeology and cultural anthropology (Sallie Han, Tracy K. Betsinger, Michaelyn Harle, and Amy B. Scott).- The Ethics of Evangelism: Why You Can't Be a Good Physician and Support Crisis Pregnancy Centers (Corinne McLeod).- Doulas as agents of reproductive justice who promote of women's international human rights: an evidence-based review and comparative case study between Brazil and the United States (Kathryn Mishkin and Luisa Fernandes).- Reproductive Flourishing: A Framework for Teaching Reproductive Ethics in Clinical Education (Amy DeBaets).

This book is the second collection of essays on reproductive ethics from Drs. Campo-Engelstein and Burcher. This volume is unique in that it is both timely and includes several essays on new technologies, while also being a comprehensive review of most of the major questions in the field, from racial disparities in reproductive healthcare to gene editing and the possibility of the creation of a transhuman species. The scholars writing these essays are pre-eminent in their fields, and their backgrounds are quite varied, including philosophers, anthropologists, physicians, and professors of law.

Reproductive ethics remains an underdeveloped area of bioethics despite the recent technological breakthroughs that carry both great promise and potential threats. Building on the first volume of work from a conference held just over one year ago, this new collection of essays from a conference held April 2017 continues this discussion as well as provides ethical insights and reviews of these emerging technologies. The ethical questions swirling around human reproduction are both old and new, but the conference presentations, and the essays derived from them, focus on new ways of appreciating old arguments such as the ethics of abortion, as well as new ways of seeing new technologies such as CRISPR and mitochondrial transfer.
show less

Lisa Campo-Engelstein, PhD, is Associate Professor at the Alden March Bioethics Institute and Department of Obstetrics and Gynecology at Albany Medical College in Albany, New York. She earned a PhD from Michigan State University in philosophy with a focus in bioethics and feminist theory, and completed a postdoctoral fellowship with the Oncofertility Consortium at Northwestern University Feinberg School of Medicine. Her main research area is reproductive ethics, especially contraception, childbirth, fertility preservation, and assisted reproductive technologies.

Paul Burcher, MD, PhD, is an Associate Professor of Bioethics at Albany Medical College, and the Program Director for the Obstetrics and Gynecology Residency Program at York Hospital in Central Pennsylvania. He is a practicing generalist obstetrician/gynecologist with over 26 years in practice in both community and academic settings. He completed a PhD in Philosophy at University of Oregon while working full-time as a clinician in obstetrics and gynecology. He is actively involved in the both the clinical and ethics education of medical students and residents, while also engaging in conceptual and empirical research on issues in reproductive ethics.