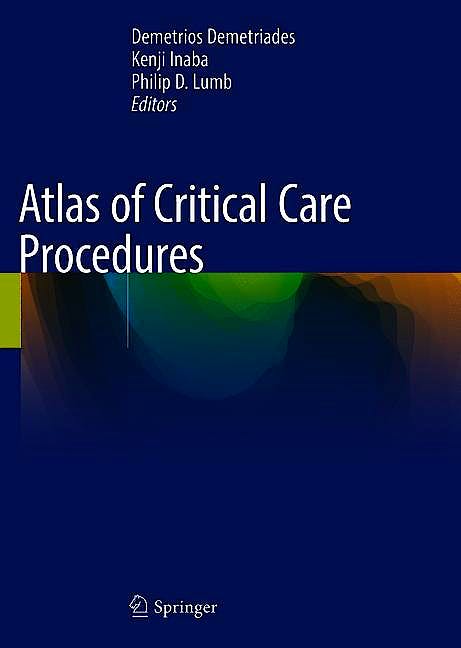 This atlas is designed to provide an all-inclusive resource that describes step by step how to perform the essential bedside procedures required to provide optimal care to the critically ill patient. Detailed descriptions of these procedures, with sequential photographs depicting each critical step, provide an in depth understanding of the anatomy, critical technical steps and common pitfalls to both military and civilian trainees. For the advanced professional operator, this atlas will provide a rapid refresher of the critical steps and is an excellent teaching resource, based on the decades of collective experience accumulated by the authors. The top quality photographs of perfused and ventilated cadavers makes this atlas a standard reference for surgeons, critical care physicians, nurses and all critical care professionals.

Prof. Demetrios Demetriades is currently tenured Professor of Surgery and Director of the Division of Trauma, Emergency Surgery and Surgical Intensive Care Unit, Los Angeles County and University of Southern California Medical Center, the largest trauma center in California and one of the largest in the United States. Dr Demetriades is one of the most published trauma surgeons in the United States and has published more than 620 peer review publications in referenced journals, two trauma atlas books, 6 books, and more than 120 book chapters. He has delivered more than 400 invited lectures in the United States and 40 other countries. Dr Demetriades has mentored many young faculty and fellows, many of whom currently hold leadership positions nationally and internationally. For his role in education, he received the title of "Master Teacher" by the USC School of Medicine. He has been the founder and course director of the annual USC National Trauma, Emergency Surgery and Surgical Critical Care Symposium, now in its 23nd year. Dr Demetriades was instrumental in the establishment of the USC Navy Trauma Training Program, now in its 13th year. This program has trained more than 2,500 US Navy personnel in trauma. He was honored numerous times by the US Navy. In 2011 he was honored by the American College of Surgeons and delivered the Scudder Oration. In 2013 he was honored by the American Heart Association with Lifetime Achievement Award in Trauma Resuscitation Science. In 2014 he received the FDA Distinguished Service Award. In 2015 he was elected in the top "1000 International Scientists" by the Republic of China. In 2017 he served as the Vice President and a member of the Executive Board of the American Association for the Surgery of Trauma. He is an Honorary member of numerous national societies in many countries, received honorary doctorates from two European universities and sits on the editorial boards of numerous journals

Dr. Inaba is MB, BS, MCCM an Associate Professor, Clinical Scholar, of Surgery, Emergency Medicine and Anesthesia at the University of Southern California. He is the Medical Director of the Surgical Intensive Care Unit and the Associate Trauma Medical Director. He is the Program Director for both the General Surgery Residency and the Surgical Critical Care Fellowship. While at USC he has been the recipient of 25 teaching awards including the prestigious USC Keck School of Medicine Overall Excellence in Teaching Award for the Clinical Sciences, the Alpha Omega Alpha Honorary Medical Fraternity Faculty Teaching Award and the Leonard Tow Humanism in Medicine Award. In addition to his teaching at USC, he has lectured extensively, having given more than 250 invited lectures around the world. He has mentored more than 95 research fellows and students who have garnered 28 separate research awards for this work. Dr. Inaba has authored more than 300 peer reviewed articles, 260 scientific presentations and 22 textbook chapters in the area of trauma resuscitation, diagnostics and hemorrhage control.