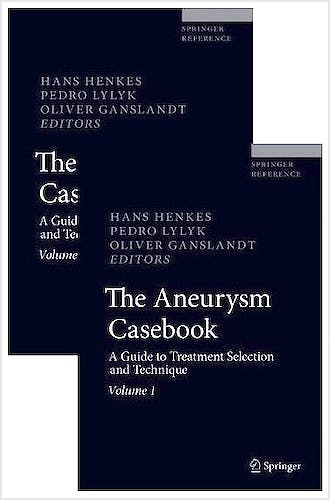 The Aneurysm Casebook. A Guide to Treatment Selection and Technique (2 Volume Set)

This encyclopedic reference book on the treatment of intracranial aneurysms offers a case-based approach to the subject that has the benefit of fully reflecting the highly individual technical and clinical challenges encountered in aneurysm patients. The book is structured by aneurysm location, ensuring ease of use. Readers will find solutions for most clinical situations that they may encounter. Different treatment strategies are described, highlighting their respective pros and cons in particular circumstances. The coverage encompasses both basic techniques, such as coil occlusion and parent vessel occlusion, and the latest developments, including extra- and intrasaccular flow diversion, intrasaccular flow disruption, bifurcation stenting, and hybrid procedures combining microsurgical and endovascular elements. Potential procedural complications are identified, and bail-out strategies to anticipate, avoid, and solve major issues are described. The authors are all respected experts in the field, and the book will be of value to vascular and endovascular neurosurgeons, interventional neuroradiologists and neurologists, stroke neurologists, and other practitioners at all levels of experience.

Pedro Lylyk is Chairman of the Endovascular Neurosurgery and Interventional Radiology Institute "ENERI" (Equipo de Neurocirugia Endovascular y Radiologia Intervencionista), with clinical responsibilities for the Neuroradiology Section in the Radiology Division and the Neurointerventional Division in the Department of Clinical Neurosciences. Dr. Lylyk's academic activity focuses on translational research in the field of image-guided minimally invasive treatment of neurovascular diseases, tumors, and back pain. He holds a variety of professorial positions, including at the University of Buenos Aires, Universidad del Salvador (Buenos Aries), and University of Santiago de Compostela (Spain). Dr. Lylyk is co-founder of the International Intracranial Stent Symposium (ICS), co-founder and past President of the Latin American Society of Diagnostic and Interventional Neuroradiology (SILAN), co-founder and past President of the Argentine Association of Diagnostic and Therapeutic Neuroradiology (AANDiT), and Chairman of the Argentine Stroke Association (AAS).

Oliver Ganslandt graduated from medical school at Friedrich-Alexander University Erlangen-Nuremberg, Germany. He completed his doctoral thesis on the subject of magnetoencephalography in 1992 and gained his Habilitation in 2002 for work on functional neuronavigation. His education as a neurosurgeon began in 1991 under Prof. R. Fahlbusch at the Department of Neurosurgery in Erlangen and continued under Prof. M. Buchfelder. He worked as vice chairman of that department until January 2014 and was then elected as chairman of the Department of Neurosurgery in Stuttgart, where he works today. His clinical and scientific interests are vascular neurosurgery, functional imaging, neurooncology, and radiosurgery. He has contributed numerous presentations at national and international meetings and serves as a reviewer for many peer-reviewed journals (including Neurosurgery and Journal of Neurosurgery) as well as various national and international scientific organizations. He is a member of the advisory board of the journal Strahlentherapie und Onkologie.