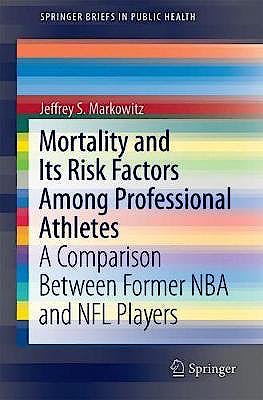 Mortality and Its Risk Factors Among Professional Athletes. A Comparison Between Former NBA and NFL Players

This eye-opening study adds to the scarce scholarly literature on professional athletes, bringing empirical rigor to issues often clouded by mystery and hearsay. It identifies socioeconomic, demographic, and career variables as risk factors for mortality among former NBA and NFL players, along with hypotheses to be tested relating to elite athletes and other U.S. populations. A detailed multivariate analysis compares mortality factors, rates, and outcomes within and between the two leagues, comparing them also with the general U.S. male population. The findings and conclusions gleaned from this research offer possibilities for future research to improve health and quality of life in this specific athlete cohort, among athletes in general, in other groups, and in the larger society.

Mortality and Its Risk Factors among Professional Athletes will spark interest among professionals and researchers in public health, sports medicine, and epidemiology; current and former NBA and NFL players, their families, coaches, trainers, and union representatives; non-professional basketball and football players, athletes from other sports, and their families, coaches, and trainers; social scientists; policymakers; obesity researchers; parents of children who play contact sports; students, teachers, and researchers in occupational health and racial disparities; and health care providers.

Jeffrey S. Markowitz, DrPH, is an epidemiologist who has authored two books, Pigskin Crossroads: The Epidemiology of Concussions in the National Football League (NFL), 2010-2012 (2013), and Lost Seasons: Arrests, Suspensions, Career Chaos, and Mortality Among National Football League (NFL) Players (2016). From 1983 to 1992, Dr. Markowitz was an adjunct assistant professor of Public Health at the School of Public Health at Columbia University in New York, NY, USA.