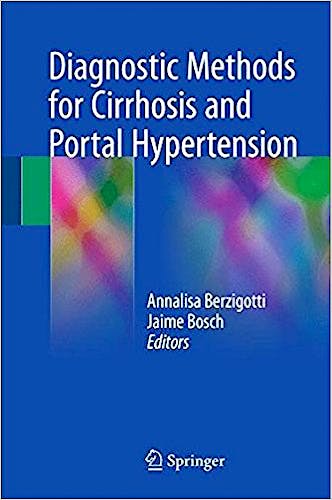 This book provides a unique up-to-date and comprehensive overview of the most important diagnostic methods available for assessing liver cirrhosis and portal hypertension. The book covers all the significant advances made in the last 10 years in HVPG and biopsy interpretation, imaging and elastography. This is a unique and well structured book authored by senior experts in the field aimed at providing updated knowledge to the hepatology specialist and to the physicians interested in chronic liver disease. The book starts by giving an overview of the disease, outlining the clinical needs in this field; this is followed by detailed information both on the invasive gold-standard methods (HVPG measurement, liver biopsy, endoscopy), and on the standard and emerging non-invasive methods, including serum markers of fibrosis, ultrasound-elastography, magnetic resonance elastography, ultrasound, contrast-enhanced ultrasound, CT, magnetic resonance and derived methods (dynamic flow assessment). The final part of the book is devoted to diagnostic tests in non-cirrhotic causes of portal hypertension (Budd-Chiari Syndrome, Portal vein thrombosis, idiopathic portal hypertension, etc), and in pediatric portal hypertension.Written by a team of worldwide opinion leaders this book pays special attention to the most promising novel non-invasive methods in the field.

Annalisa Berzigotti graduated in Medicine, specialised in Internal Medicine and completed a doctorate in Ultrasound in Medicine at the University of Bologna, Italy. She focused on liver disease early in her career, and earned further clinical and research experience in hepatology at the Hepatic Hemodynamic Laboratory of the Liver Unit, Hospital Clinic, University of Barcelona, Spain where she worked as a clinical researcher in 2008-2014 obtaining a doctorate on clinical aspects of portal hypertension. Since December 2014 she is staff hepatologist at the University Clinic of Visceral Surgery and Medicine (UVCM) of the Inselspital, University of Berne, Switzerland. In 2016, Annalisa Berzigotti was appointed as Associate Professor of Hepatology at the Faculty of Medicine of the University of Berne. In 2016 she has also been appointed Visiting Professor at the University of Belgrade. Her main research interest focuses on clinical and diagnostic aspects of chronic liver disease; in this field she extensively worked on the invasive and non-invasive assessment of cirrhosis and portal hypertension. She was member of the Scientific Committee of the Baveno VI consensus conference on the management of portal hypertension, and developed the EFSUMB recommendations on reporting of ultrasound in portal hypertension. Since 2016 she is member of the Scientific Committee, Governing Board of the European Association for the Study of the Liver (EASL). She is Associate Editor of Digestive and Liver Disease and of Seminars in Liver Disease. She is author/co-author of over 100 peer-reviewed original and review articles and of 15 book chapters on portal hypertension-related aspects.

Jaime Bosch graduated in Medicine with honours in 1970 at the University of Barcelona Medical School, where he specialized in Internal Medicine in 1974 and in Gastroenterology in 1979. He obtained a doctorate in Medicine with honours at the University of Barcelona in 1973. He is member of the Liver Unit of the Hospital Clinic in Barcelona since 1979. In 1980-81 he did a postdoctoral stage at Yale University, working under the direction of Prof RJ Groszmann. Back in Barcelona in 1982 he founded the Hepatic Hemodynamic Laboratory at the Barcelona Liver Unit, where over 100 international fellows have been trained. From 2006 to 2015 he was Scientific Director of the Centro de Investigacion Biomedica en Red de Enfermedades Hepaticas y Digestivas (Ciberehd), Ministry of Science and Innovation, Spain. He is full Professor of Medicine at the University of Barcelona and Guest Professor at the University of Berne. Dr. Bosch is a worldwide recognized opinion-leader in the field of portal hypertension and cirrhosis, having authored over 400 publications in peer-reviewed international journals in all the branches of this area (H index 102). For his scientific merits, in 2006 Dr. Bosch was awarded the Special Recognition Award, European Association for the Study of the Liver, the Gold Medal of the Canadian Association for the Study of the Liver in 2012. In 2014 he was awarded PhD Honoris Causa, School of Medicine, Universite Paul Sabatier, Toulouse, France, and in 2016 he was awarded Doctor Honoris Causa, Medical University Iuliu Hatieganu, Cluj-Napoca, Romania.