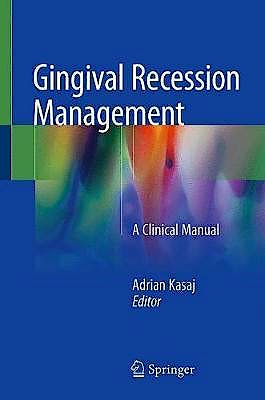 This book is designed to serve as a clear and concise clinical manual that covers all aspects of the current management of gingival recession, with a particular focus on surgical techniques with the adjunctive use of autogenous tissues or soft tissue substitutes for recession coverage. A structured overview of the various surgical techniques is provided with the aid of high-quality illustrations, delivering an evidence-based clinical treatment guideline. In addition, individual chapters are dedicated to the classification of gingival recession, etiology and prevalence, clinical examination and diagnosis, decision making, potential complications, and postsurgical care. Gingival recession is a common condition in the adult population and is related to several undesirable conditions such as unaesthetic appearance, root caries, and hypersensitivity. Periodontal plastic surgery is now an important tool in the armamentarium of the clinician treating gingival recessions, and practitioners at all levels will find this book to be an invaluable source of guidance.

Dr. Adrian Kasaj, DDS, MSc, PhD is a Professor of Periodontology in the Department of Operative Dentistry and Periodontology at the University Medical Center Mainz, Germany. In 2002 he received his Dr.med.dent degree from the University of Mainz and then continued postgraduate training in Periodontology (2002-2005) at the same university. He became a certified Specialist in Periodontology of the German Society of Periodontology (DGParo) in 2006 and also of the European Dental Association (EDA) in 2007. In 2009 he completed his PhD thesis (Habilitation) and was appointed as an Associate Professor. He became a Visiting Professor in the Department of Periodontology at Timisoara University, Romania in 2012. In 2014 he completed the post-graduate program "Master of Science in Oral Implantology" (German Society of Implantology/Steinbeis University) and in the same year was awarded the "Doctor honoris causa" (Dr.h.c.) degree by the University of Timisoara. In 2016 he was appointed as a Professor of Periodontology at Mainz University. He has published more than 100 original articles and reviews, lectures extensively in Germany and abroad, and serves on several editorial boards and advisory committees. Since 2014 he has also served as chairman of the "New Working Group in Periodontology" (NAgP). His research interests include the use of soft tissue substitutes in periodontal plastic surgery, local antimicrobial therapy, and use of biomaterials in regenerative periodontal therapy.