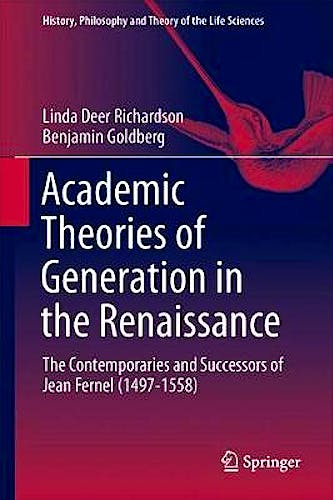 Academic Theories of Generation in the Renaissance. The Contemporaries and Successors of Jean Fernel (1497-1558) (History, Philosophy and Theory…)

This volume deals with philosophically grounded theories of animal generation as found in two different traditions: one, deriving primarily from Aristotelian natural philosophy and specifically from his Generation of Animals; and another, deriving from two related medical traditions, the Hippocratic and the Galenic. The book contains a classification and critique of works that touch on the history of embryology and animal generation written before 1980. It also contains translations of key sections of the works on which it is focused. It looks at two different scholarly communities: the physicians (medici) and philosophers (philosophi), that share a set of textual resources and philosophical lineages, as well as a shared problem (explaining animal generation), but that nevertheless have different concerns and commitments. The book demonstrates how those working in these two traditions not only shared a common philosophical background in the arts curricula of the universities, but were in constant intercourse with each other.

This book presents a test case of how scholarly communities differentiate themselves from each other through methods of argument, empirical investigation, and textual interpretations. It is all the more interesting because the two communities under investigation have so much in common and yet, in the end, are distinct in a number of important ways.

Linda Deer Richardson’s academic career was transatlantic. She discovered an interest in history of ideas during an undergraduate course at Rice University, and pursued history of science and medicine as a major part of her honours course at the University of Oxford. She first encountered Jean Fernel during a master’s course at Princeton University, and completed her thesis in 1980 as a student at the Warburg Institute of the University of London. Since then she has worked in museums, colleges and publishing as an educator.