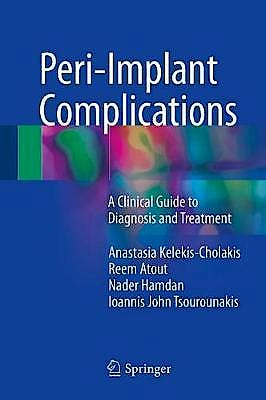 Peri-Implant Complications. A Clinical Guide to Diagnosis and Treatment

This book is an up-to-date reference that provides detailed guidance on how to diagnose and manage the soft and hard tissue complications that may be associated with a functioning dental implant placement, such as peri-implant mucositis, soft tissue loss, and peri-implantitis. Treatment options for each complication are described and illustrated step by step and carefully selected cases are presented to further explain the individual stages in management and to highlight key learning points. Practical advice is offered on all aspects of diagnosis, and information is also presented on the definition and etiology of the various complications. The book is in an easy-to-read format and includes a review of the latest literature on the topic.

Dr. Hamdan is an Assistant Professor and Director of the Graduate Periodontics Program at Dalhousie University. He obtained his first dental degree from Jordan University of Science and Technology in 1999, practiced general dentistry for 12 years before pursuing an MSc in Dental Sciences program at McGill University. Dr. Hamdan went on to complete a three-year specialty program in Periodontics at the University of Manitoba. In 2016, he obtained a second master's degree - a Master in Dentistry (Specialty: Periodontics), became a certified periodontist by passing the Canadian National Dental Specialty Examination and later became Fellow of the Royal College of Dentists of Canada (FRCD(C)).

Dr. John M. Tsourounakis graduated from Aristotle University in Greece with the degree of Doctor of Care Management from the University of New Orleans, College of Business, in 2011, graduating with distinction with an award in academic excellence. He then 2012, and in 2013 he completed a postgraduate Fellowship in Dental Implantology, from Louisiana State University, School of Dentistry in New Orleans. Dr. Tsourounakis has authored several scientific papers, published in peer-reviewed journals. He is a Diplomate of the American board of Periodontology and a Fellow of the Royal College of Dentists of Canada.

Dr. Reem N. Atout received her Bachelor's degree in Dental Surgery (BDS) from Jordan University of Science and Technology in 2000, shortly after that she moved to California where she obtained her California dental license and practiced general dentistry for a few years. In 2006, Dr. Atout joined the University of Alabama in Birmingham to continue her training and earned a Master in Science (MS) and a Certificate in Periodontology. Upon graduating she moved to Boston where she joined Harvard University as a clinic instructor for one year.
In 2010 Dr. Atout joined the periodontal department at the University of Manitoba as an assistant professor. The majority of her teaching is at the Graduate Periodontal Program. She is also a part time periodontist in a private practice in Winnipeg.
Dr. Atout is a fellow of the Royal College of Dentists of Canada (FRCDC), a diplomate of the American Board of Periodontology and a member of the Canadian and American Academy of Periodontology, and the Canadian Dental Association.