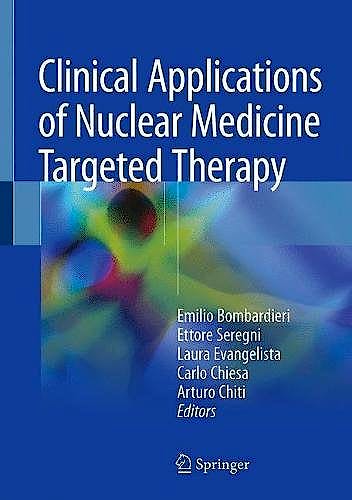 This book offers a practical and modern update on radioisotope therapy. Clinically oriented, it provides a thorough guide to patient management, with the latest indications and procedures for the current radioisotopic treatments. It addresses the clinical problems associated with each respective pathology, discussing the management of patients (diagnosis and non-radioisotope therapy), the radiopharmaceuticals available today, and the standardized radioisotopic procedures. Wherever possible, information on dosimetry is included at the end of each topic, together with a list of and comments on the most recent guidelines with their recommendations for radiometabolic therapy.

The book is divided into six main sections: thyroid diseases, hepatic tumors (HCC and hepatic metastases), bone metastases from prostate cancer, lymphomas, and neuroendocrine tumors. The last section is dedicated to new perspectives of radioisotope treatment. Based on contributions from of a mu

ltidisciplinary team of specialists: oncologists, surgeons, endocrinologists, hematologists, urologists, radiopharmacists and nuclear medicine physicians, it provides a comprehensive analysis of the position of radioisotope treatments among the various therapeutic options.

Ettore Seregni is the Head of the Nuclear Medicine Therapy and Endocrinology Unit at the IRCCS National Cancer Institute of Milan. His current research interests include the development and clinical validation of different radiopharmaceuticals for cancer therapy. His main fields of clinical research are neuroendocrine tumors, prostatic and thyroid cancer, and metastatic bone lesions.

Laura Evangelista is a nuclear medicine physician working at Veneto Institute of Oncology IOV – IRCCS in Padova, Italy. She worked as a research fellow at University “Federico II” of Napoli Italy, Memorial Sloan Kettering of New York City, USA and the Mayo Clinic of Rochester (Minnesota, USA) focusing on PET/CT in breast cancer, prostate cancer and molecular imaging. In 2009 she joined the Veneto Institute of Oncology, where she is currently pursuing a special interest in the nuclear diagnostic evaluation of cancer.

Since October 2005, member of Dosimetry Committee of the European Association of Nuclear Medicine. Senior advisor member since 2013. From September 2006, coordinator of the of Italian Internal Dosimetry Group.
Teacher to IAEA dosimetry course in November 2013 & 2016, and EFOMP dosimetry course in 2016. In September 2016, IAEA expert mission to implement dosimetry in Kuwait City hospital.
From 2004 to the present, teacher of “Nuclear Medicine Equipment” at the postgraduate Nuclear Medicine School for physicians.
Consultant for Biocompatibles BTG L.t.d. for dosimetry and safety of Therasphere treatment of liver disease. In 2015, consultant of MedPace corelab (Cincinnati OHIO USA) for instrument validation in an international multicenter study.

Arturo Chiti graduated with a degree in Medicine and Surgery from the University of Milan and joined the Training Program in Nuclear Medicine at the University of Milan. He subsequently worked as Associate Chief at the National Cancer Institute in Milan, where he began his clinic and scientific experience in Oncology. He was appointed Full Professor in Diagnostic Imaging and Radiotherapy at the Humanitas University in Milan and is currently Director of the Training Program in Diagnostic Imaging at Humanitas University. He served as President of the European Association of Nuclear Medicine and has advised the International Atomic Energy Agency for many years, and his contributions have been recognized with an honorary membership in the European Society for Therapeutic Radiology and Oncology.