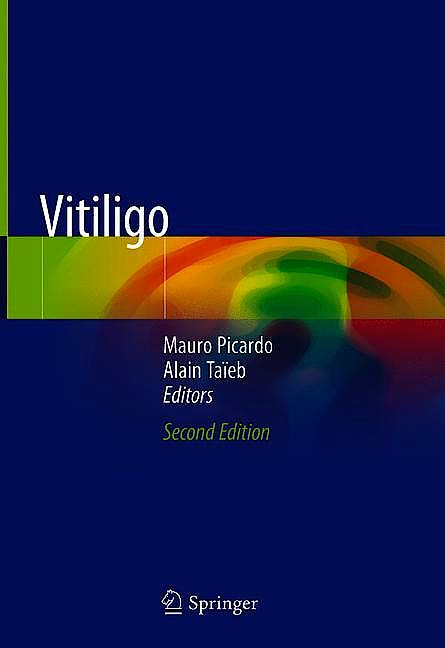 Since the first edition of this book was published, new knowledge has been gained on Vitiligo. This widely revised and updated second edition, written by worldwide experts in the field, fully reflects this progress. The apparently, simple and poorly symptomatic presentation of the disease has been a strong disadvantage to its study, as compared to other common chronic skin disorders such as psoriasis and atopic dermatitis. A good skin-based angle of attack is also lacking because generalized Vitiligo is clearly epitomizing the view of skin diseases as simple targets of a systemic unknown dysregulation (diathesis). This view has mostly restricted Vitiligo to the manifestation of an auto-immune diathesis and skin events, which are easily detected using skin biospies in most other situations, have not been precisely recorded, with the argument that a clinical diagnosis was sufficient for the management of the patient with Vitiligo. This richly illustrated second edition reflects the constant international effort to share the information gathered about this disorder at the clinical, pathophysiological and therapeutic levels. Its aim still being to bridge current knowledge at the clinical and investigative level, to point to the many unsolved issues, and to delineate future priorities for research.

MAURO PICARDO: Graduated in Rome at "La Sapienza" University, his main topics of interest are skin biochemistry, free radical mediated damage of the skin, mechanism of control of skin pigmentation, and pigmentary disorders. As Director of the Integrated Center of Metabolomic Research (CIRM) at the San Gallicano Institute, he coordinates lipidomic studies on acne and related disorders (seborrheic dermatitis, rosacea) in sebum and blood samples. The team is specialised in vitiligo and in particular in the study of the biological and molecular mechanisms involved in pigmentation with the aim of finding new preventative and therapeutic treatments. Dr Picardo has served in the Board of national and International scientific societies as well as being President of the ESPCR. He chairs the Vitiligo European Task Force and the Pigmentary disorders group of the EADV in collaboration with Dr. Alain Taieb. Professor Picardo has organized several national and international conferences (such as the Vitiligo International Symposium held in Rome in Dec 2016) and is member of the Editorial Board of many dermatological and biochemical journals including Pigment Cell and Melanoma Research and Experimental Dermatology. He is author of more than 300 publications in peer-reviewed journals and more than 30 chapters in different books, most of which are dedicated to pigmentation, focusing on both the biological and clinical approaches.

Alain Taieb: Dr Taieb is Professor of Dermatology and Head of the Department of Dermatology and Pediatric Dermatology at Bordeaux University Hospitals, Director of the National Reference Centre for Rare Skin Disorders established in 2005. Dr Taieb studied paediatric dermatology under Prof J Maleville at Bordeaux Children's Hospital and is a former research fellow from the University of Michigan at Ann Arbor. He serves or has served on the board of several national (Societe Francaise de Dermatologie, Societe de Recherche Dermatologique) and international societies (ESPD, ESPCR, EAACI). Former president of the Societe Francaise de Dermatologie Pediatrique, and coordinator of the Inserm- Dermatological Learned Societies committee. Serves as associate editor, British Journal of Dermatology, Pigment Cell Melanoma Research, Melanoma Research, Experimental Dermatology and Pediatric Dermatology. Has created and managed the European Task Force on Atopic Dermatitis from 1990 to 2000, and created of the Vitiligo European Task Force on Vitiligo with Dr M Picardo in 2003; Chair of the special interest group on Vitiligo of the international federation of pigment cell societies (IFPCS). Organiser of the annual course of Paediatric Dermatology, Arcachon since 1992; Organiser or co-organiser of several international meetings (European Soc Ped Dermatol, Bordeaux, 1990; European Soc Pigment Cell Res, Bordeaux, 1997, World Congress of Dermatology, Paris, 2002; International Symposium on Atopic Dermatitis, Arcachon 2005; International Pigment Cell Conference, Bordeaux 2011). Has authored more than 400 articles in peer-reviewed journals and more than 40 chapters in multiauthored books. Co-author of "History of Atopic Dermatitis" with Drs Wallach and Tilles, Masson, 2004, "Neonatal Dermatology" Maloine, 2009, with Drs Enjolras, Vabres and Wallach, and "Vitiligo" (Springer, 2010, with Dr Picardo). His major topics of interest are paediatric dermatology, genodermatoses, atopic dermatitis, pigment cell disorders and the ex-vivo study of the epidermal melanin unit (physiology and pathophysiology). He has received the Certificate of appreciation of the International League of Dermatological Societies (ILDS) in 2009 for several achievements made during his career and the American Skin Association award for his work on pigment cell disorders in 2012.