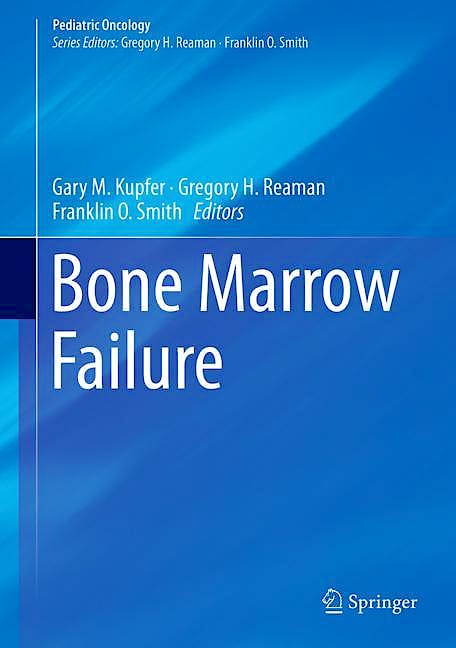 This book presents the latest scientific knowledge on inherited and acquired bone marrow failure syndromes, describing the advances in understanding of genetics and pathophysiology that have been achieved as a result of high-throughput DNA sequencing, RNA expression studies, and modern biochemistry techniques. The full range of relevant conditions is covered, including acquired aplastic anemia, Fanconi anemia, ribosomopathies, telomeropathies, dyskeratosis congenita, Shwachman-Diamond syndrome, Diamond-Blackfan anemia, and congenital neutropenias and thrombocytopenias. In addition, it is explained how the study of these rare diseases has uncovered important new science and elucidated the pathophysiology of more common hematological and oncological diseases. A treatment-specific chapter describes options ranging from the conventional to the cutting edge. Bone Marrow Failure will be of value for both trainee and practicing hematologists and oncologists.

Gary M Kupfer, MD, is Professor of Pediatrics and Pathology, Chief, Section of Hematology-Oncology, Assistant Director for Pediatric Oncology, Smilow Cancer Center, and Director of the Yale Hematology Treatment Center, Yale University School of Medicine. He graduated from the Johns Hopkins University School of Medicine, completed a residency in pediatrics at the Children's Hospital of Philadelphia at the University of Pennsylvania, and trained as a fellow in pediatric hematology-oncology at the Dana-Farber Cancer Institute and the Children's Hospital, Boston, at Harvard University. After serving as instructor at Harvard, Dr Kupfer opened his own laboratory as a junior faculty at the University of Virginia, working on DNA repair, hematopoiesis, and applied therapeutics, before moving his operation to Yale in 2007. He has authored more than 50 articles, mostly focused on the basic science of DNA repair and genomic instability, using Fanconi anemia as a genetic model. Dr Kupfer is active in the American Society of Hematology, reviews regularly for numerous journals, including BLOOD, and study sections for the NIH, St Baldrick's, and Alex Lemonade Stand Grants. He also serves on boards of trustees at home, such as The Hole in the Wall Gang Camp, as well as advisory groups internationally, such as in Israel and the Republic of Georgia.

Gregory H. Reaman, M.D. joined the Center for Drug Evaluation and Research, Office of New Drugs, U.S. Food and Drug Administration as the Associate Director of the Office of Oncology Drug Products in 2011. He is the Founding and Immediate Past Chair of the Children's Oncology Group (COG) having served in this capacity from 2000 through 2010. The COG is comprised of over 200 member institutions, dedicated to clinical, translational, and epidemiology research in childhood cancer. He is a Professor of Pediatrics at The George Washington University School of Medicine and Health Sciences and a member of the Division of Hematology-Oncology at the Children's National Medical Center in Washington, D.C., which he directed for more than 17 years.He has served on the Editorial Boards of Leukemia, Journal of Clinical Oncology, Journal of Pediatric Hematology/Oncology, Pediatric Blood and Cancer, The Oncologist, Cancer, and Physicians Data Query (PDQ), National Cancer Institute as well as PLWC (People Living with Cancer, now Cancer.net). He has served as an Associate Editor of Cancer and Leukemia and Lymphoma. He served on the Board of Directors of the American Cancer Society and chaired its Task Force on Children and Cancer. He has authored or co-authored more than 300 peer-reviewed publications and more than 25 books and book chapters. His research interests include the biology and therapy of childhood acute leukemia and new drug development for pediatric cancer.

Franklin O. Smith, III, M.D., FAAP, FACP, is Vice President for Medical Affairs at Medpace and is Professor of Medicine and Pediatrics at the University of Cincinnati College of Medicine. He graduated from the University of South Carolina School of Medicine and completed postdoctoral training in pediatrics at the University of Florida and fellowship training in pediatric hematology/oncology at the University of Washington and the Fred Hutchinson Cancer Research Center. Prior to joining Medpace, Dr. Smith was the Clinical Director at the University of Cincinnati Cancer Institute. Previously, he was the Director, Division of Hematology/Oncology at Cincinnati Children's Hospital Medical Center and Vice-Chair of the Children's Oncology Group. He has authored more than 170 articles in medical and scientific journals. Dr. Smith is active with various national and international committees and societies in the field of research and clinical care. He serves on National Board of Directors for the Leukemia and Lymphoma Society, President of the Board of Managers for FACT Consulting Services, faculty for the ASCO/AACR Clinical Cancer Research Workshop, and a member of the NCI's Central Institutional Review Board. Dr. Smith has also served on standing and ad hoc committees for the FDA and NIH.