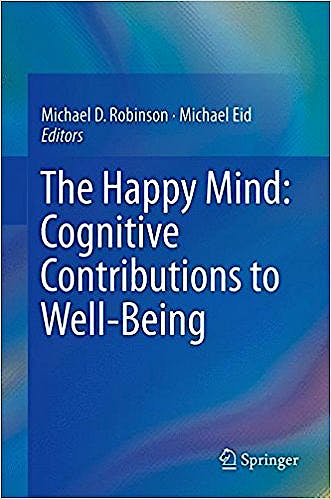 This edited volume focuses on different views of happiness and well-being, considering constructs like meaning and spirituality in addition to the more standard constructs of positive emotion and life satisfaction. A premise of the volume is that being happy consists of more than having the right things happen to us; it also depends on how we interpret those events as well as what we are trying to achieve. Such considerations suggest that cognitive-emotional factors should play a fairly pronounced role in how happy we are. The present volume pursues these themes in the context of 25 chapters organized into 5 sections. The first section centers on cognitive variables such as attention and executive function, in addition to mindfulness. The second section considers important sources of positive cognition such as savoring and optimism and the third section focuses on self-regulatory contributions to well-being. Finally, social processes are covered in a fourth section and meaning-related processes are covered in the fifth. What results is a rich and diverse volume centering on the ways in which our minds can help or hinder our aspirations for happiness.

Michael D. Robinson is a Professor of Psychology at North Dakota State University. He received his Ph.D. in social psychology from the University of California, Davis, in 1996. He is a prolific researcher in the areas of personality, assessment, self-regulation, cognition, and emotion whose work has been funded by NSF and NIH. He has been or is an Associate Editor for a number of journals, including Cognition and Emotion, Emotion, and Journal of Personality and Social Psychology. In addition, he has edited two published books: Handbook of Cognition and Emotion (Robinson, Watkins, & Harmon-Jones, 2013; Guilford Press) and The Power of Metaphor (Landau, Robinson, & Meier, 2014; American Psychological Association). He is considered an expert in implicit approaches to personality and in cognitive approaches to emotion and self-regulation.

Michael Eid is professor of psychology at the Free University of Berlin, Germany. He received his doctorate from the University of Trier (Germany) in 1994, and has been professor and visiting professor at several German universities and the University of Geneva (Switzerland). His main research interests concern the analysis of multimethod data, longitudinal data analysis, structural equation modeling, and item response theory. His more applied research focuses on subjective well-being and health psychology. He has been editor and associate editor of several journals including Methodology and the Journal of Positive Psychology.