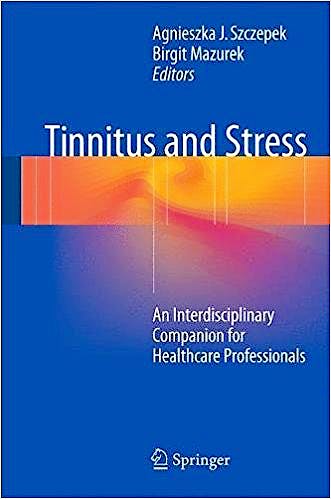 Tinnitus and Stress. An Interdisciplinary Companion for Healthcare Professionals

This book provides up-to-date scientific information on the pathways by which psychosocial stress can affect the auditory system and describes current approaches to the management of patients with stress-related tinnitus. The latest evidence is presented on aspects such as the role of stress hormones in auditory function, the effects of allostatic load, circadian sensitivity to auditory trauma, and the association between stress-related biomarkers and tinnitus. The clinically oriented chapters discuss psychometric instruments of value in the tinnitus clinic and present stress-related tinnitus treatment protocols and outcome measures.

It is widely acknowledged that the tinnitus percept acts as a stressor. However, it is also now evident that psychosocial stress can play a causative role in tinnitus and that the impact varies according to the level, duration, and quality of the stress. Assessment of the types and levels of stress in tinnitus patients before, during, and after treatment is therefore very important. Healthcare professionals attending tinnitus patients will benefit from the information that this book provides on the relationship between tinnitus and stress and from the practical guidance that it offers.

Agnieszka J. Szczepek is project leader and a member of the academic staff of the ORL Research Laboratory at the Charité University Hospital, Berlin, Germany. She graduated in Biology from the University of Warsaw, Poland, in 1985 and later obtained her PhD (Medical Sciences, Experimental Oncology/Immunology) from the University of Alberta, Edmonton, Canada. After a period as a postdoc in the Department of Medical Microbiology and Infectious Diseases, University of Alberta, she joined the Chlamydial Research Group in the Department of Molecular Biology, Max Planck Institute of Infection Biology, Berlin, where she became project and team leader in 2001. She took up her present position in 2006. Dr. Szczepek’s main research interests are molecular diagnostics, the role of inflammation in neurosensory disorders, and ototoxicity: mechanisms and prevention. She is the author of several articles in peer-reviewed journals, including many well-received publications on tinnitus.

Birgit Mazurek is a professor in the Tinnitus Center of the Charité Hospital in Berlin, Germany, of which she has been Director since 2001. The center is one of the largest medical units in Germany to specialize in diagnosis and treatment of the condition, and Professor Mazurek was involved in its creation. In addition to the ORL specialists on her team, she employs clinical psychologists and physiotherapists and collaborates closely with neurologists, cardiologists, and endocrinologists. Her scientific interests in tinnitus extend from clinical aspects to basic research. She has initiated and completed several studies with the use of animal models and inner ear explants to better understand the pathophysiology of tinnitus. The issue of tinnitus and stress is of particular interest to her. Most tinnitus patients referred to her center associate the onset of their condition with a particularly stressful event or a long-term stressful situation. As a result, her clinical interests and basic research have focused especially on the issue of emotional stress, gene and protein expression, and tinnitus. Since 1998 she has been Chair and organizer of the national Annual Tinnitus Symposium. She is a member of several ORL/ENT scientific societies and the author of 80 international publications, mainly on tinnitus.