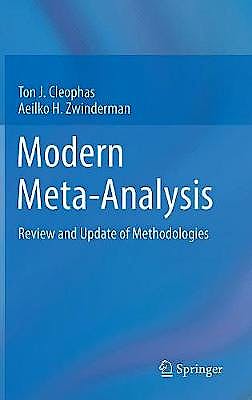 Modern meta-analyses do more than combine the effect sizes of a series of similar studies. Meta-analyses are currently increasingly applied for any analysis beyond the primary analysis of studies, and for the analysis of big data. This 26-chapter book was written for nonmathematical professionals of medical and health care, in the first place, but, in addition, for anyone involved in any field involving scientific research. The authors have published over twenty innovative meta-analyses from the turn of the century till now. This edition will review the current state of the art, and will use for that purpose the methodological aspects of the authors' own publications, in addition to other relevant methodological issues from the literature.

Are there alternative works in the field? Yes, there are, particularly in the field of psychology. Psychologists have invented meta-analyses in 1970, and have continuously updated methodologies. Although very interesting, their work, just like the whole discipline of psychology, is rather explorative in nature, and so is their focus to meta-analysis. Then, there is the field of epidemiologists. Many of them are from the school of angry young men, who publish shocking news all the time, and JAMA and other publishers are happy to publish it. The reality is, of course, that things are usually not as bad as they seem. Finally, some textbooks, written by professional statisticians, tend to use software programs with miserable menu programs and requiring lots of syntax to be learnt. This is prohibitive to clinical and other health professionals.

The current edition is the first textbook in the field of meta-analysis entirely written by two clinical scientists, and it consists of many data examples and step by step analyses, mostly from the authors' own clinical research.

The authors are well-qualified in their field. Professor Zwinderman is past-president of the International Society of Biostatistics (2012-2015), and Professor Cleophas is past-president of the American College of Angiology (2000-2002). From their expertise they should be able to make adequate selections of modern methods for clinical data analysis for the benefit of physicians, students, and investigators. The authors have been working and publishing together for 17 years, and their research can be characterized as a continued effort to demonstrate that clinical data analysis is not mathematics but rather a discipline at the interface of biology and mathematics.

The authors as professors and teachers in statistics at universities in The Netherlands and France for the most part of their lives, are convinced that the scientific method of statistical reasoning and hypothesis testing is little used by physicians and other health workers, and they hope that the current production will help them find the appropriate ways for answering their scientific questions.

Three textbooks complementary to the current production and written by the same authors are Statistics applied to clinical studies 5th edition, 2012, Machine learning in medicine a complete overview, 2015, SPSS for starters and 2nd levelers, 2015, all of them edited by Springer Heidelberg Germany.