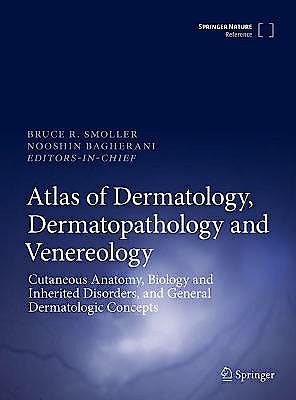 Bringing together thousands of the best dermatologic clinical and pathological photographs and figures from researchers and scientists around the world, this volume focuses on the most prevalent dermatologic disorders as they relate to cutaneous infectious and neoplastic conditions and procedural dermatology. It includes atypical presentations of various disorders, giving insight into differential diagnoses, helping to familiarize the reader with some of the rarest dermatologic disorders.

Atlas of Dermatology, Dermatopathology and Venereology Volume 3 is written for dermatologists, dermatopathologists, and residents and summarizes data regarding any dermatologic disorder and syndrome. Each entry includes an introduction, clinical and pathological manifestations, diagnosis, differential diagnosis, and treatment and prognosis.

Bruce Smoller MD, is Chair and Professor, Department of Pathology and Laboratory Medicine, and Professor, Department of Dermatology at the University of Rochester School of Medicine and Dentistry. Dr. Smoller began his career in pathology as a resident in anatomic and clinical pathology at Harvard’s Beth Israel Hospital. From there, he did a dermatopathology fellowship at Cornell Medical School/New York Hospital under the tutelage of Dr. Scott McNutt. He remained on faculty at Cornell for several years before relocating to Stanford University in 1990 to assume the position as Director of Dermatopathology and rose through the ranks to become a Professor of Pathology and Dermatology. In 1997, he relocated to the University of Arkansas where he became Chair of the Department of Pathology, in addition to his role as the Director of Dermatopathology. He remained there until 2011 when he was appointed to the position of Executive Vice President of the United States and Canadian Academy of Pathology. He spent nearly three years in that position before accepting the position at the University of Rochester School of Medicine and Dentistry. Dr. Smoller has published more than 275 original articles, 42 book chapters, and 15 textbooks on dermatopathology. He has served as the Editor-in-Chief of the Journal of Cutaneous Pathology and as the President of the American Society of Dermatopathology. He also received the Nickel Award from the American Society of Dermatopathology in recognition of lifetime excellence in teaching.

Nooshin Bagherani MD, MA, PhD candidate of molecular Medicine, Department of Molecular Medicine, School of Advanced Medical Technologies, Tehran University of Medical Sciences, Tehran, Iran Nooshin Bagherani, MD, MA, is dermatologist, bachelor of law, and master of international law. She graduated as a general practitioner from Arak University of Medical Sciences in 2003 and as a dermatologist from Ahvaz Jondishapur University of Medical Sciences in 2010. In her dermatology residency, she learned dermatology under the tutelage of Prof. Reza Yaghoobi, Dr. Mohammad Ali Mapar, Dr. Mohammad Omidian, Dr. Sima Rasaei, and Dr. Zahra Musavi, and cosmetology under training by Dr. Mohammad Radmanesh. ix Dr. Bagherani has published more than 50 articles in the fields of dermatology and various basic sciences, six book chapters, and one textbook on dermatology. She is on the editorial boards of many international dermatology journals and several law journals. She also serves as an ad hoc reviewer for multiple dermatology and law journals. In 2018, Dr. Bagherani received the award of Brilliant Talent for attaining the third national rank in the university entrance exam in her PhD field. In 2018 and 2019, she was named to Iran ’s National Elites Foundation. In 2018, she received a Publons Peer Review Award for placing in the top 1% of reviewers in clinical medicine. For many years, Dr. Bagherani worked as an independent researcher in her private offices in Khoramshar and Arak, Iran. Currently, she is a PhD candidate of molecular medicine at the Tehran University of Sciences under the supervision of Dr. Gholamreza Tavoosidana.