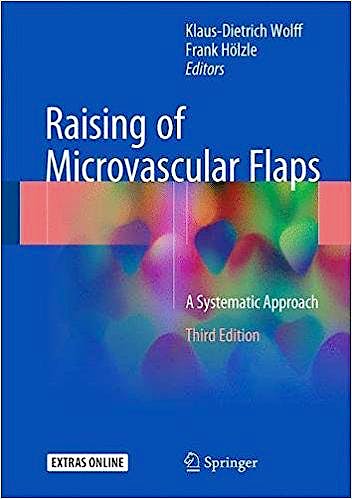 This book provides all who are involved in microsurgical tissue transfer, including plastic surgeons, ENT surgeons, trauma surgeons, and oral and maxillofacial surgeons, with all the knowledge they will need in daily practice. The new third edition continues with the didactic principle ofsplitting up complex surgical procedures into a series of simple steps, guided by clearly defined donor site-specific landmarks. For each flap, an anatomically based system of step-by-step procedures is proposed that best combines simplicity, safety, and reliability for successful flapharvesting. Photographs of each step are accompanied by schematic color drawings to enhance understanding of the anatomy. Surgical techniques are also shown in every detail in supplementary videos available online. Additional features in this edition include highly useful modificationsof elevation of the radial forearm flap as well as new chapters on the rectus abdominis flap, a reliable option for covering deep and extended defects, and the medial sural perforator flap. Like the previous editions, the book will serve as a quick source of focused and straightforwardinformation valuable for any reconstructive surgeon.

Klaus-Dietrich Wolff has been Professor and Head of the Department of Maxillofacial Surgery, Klinikum rechts der Isar, Technische Universität München (TUM), Munich, Germany, since 2007. After studying medicine and dentistry at FU Berlin, Professor Wolff completed his PhD in bothsubjects in 1987 and acquired his postdoctoral teaching qualification (habilitation) in 1994. Subsequently he was appointed adjunct professor at FU Berlin in 1999. This was followed by a position at Ruhr University Bochum, where he held the Chair of Oral Surgery and Plastic Facial Surgeryfrom 2000 to 2007 and the post of medical director from 2004 to 2007. He moved to TUM in 2007. Professor Wolff researches in the area of plastic reconstructive facial surgery with the aim of improving the microsurgical transfer of tissue through a better understanding of the construction, physiology, and healing of tissue transplants. He is working on  an extracorporal perfusion system intended to expand the scope of reconstruction even in the most difficult situations; moreover, he developed the national guidelines for the treatment of oral cavity carcinoma. He has been a  recipient of the Martin Wassmund Award from the German Society of Maxillofacial Surgery.