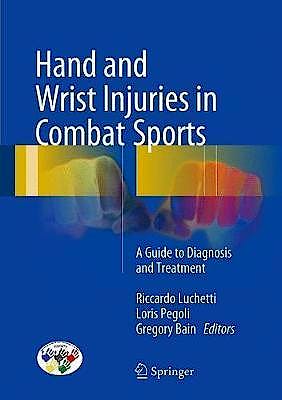 Hand and Wrist Injuries in Combat Sports. A Guide to Diagnosis and Treatment

This well-illustrated book describes the injuries to the hand and wrist that are commonly encountered among participants in combat sports, explaining the mechanisms of injury and offering state of the art guidance on diagnosis and treatment. It covers both injuries characteristic of individual sports, such as kendo, karate, judo, jiu-jitsu, aikido, and mixed martial arts, and pathologies encountered across the full range of combat sports, including boxing, wrestling, and taekwondo. In addition to management, careful attention is paid to rehabilitation following injury and to psychological aspects of recovery from injury. The book is the result of a collaboration with the International Society for Sport Traumatology of the Hand (ISSPORTH) and has been designed to meet the needs of all practitioners who work with combat sports athletes. While especially helpful for surgeons, physicians, therapists, and rehabilitators, it will also be of value to coaches, trainers, and players. The authors are leading international experts in the field who have been involved with international societies and in some cases have personal experience of combat sports at a high level.

Riccardo Luchetti, MD, is Chief of Rimini Hand and Upper Extremity Surgery and Rehabilitation Center & Contract Professor in Wrist Arthroscopy at the Clinic of Plastic and Reconstructive Surgery, Multimedica Policlinic of Milan University, Milan, Italy and current President of the International Society for Sport Traumatology of the Hand (ISSPORTH). Between 2000 and 2009 he was a contract professor in Hand Surgery at the Clinic of Plastic and Reconstructive Surgery of Ancona University. Dr Luchetti is a past president of both the Italian Society for Surgery of the Hand (SICM) and the European Wrist Arthroscopy Society (EWAS). He is the author of more than 120 scientific articles and book chapters as well as three books; he is also co-author of the Italian Textbook of Hand Surgery.

Loris Pegoli, MD, FSSEMM, is Chief of the Humanitas San Pio X Clinic Hand Unit in Milan, current President of the Sport Commission of the International Federation of Societies for Surgery of the Hand - IFSSH. From 2001 until June 2012 he worked as Chief of the Hand Unit Trauma Service, Plastic Surgery Department, Policlinico Multimedica, University of Milan, and from 2005 to 2012 he was also a contract professor at Vita e Salute University, Saint Raffaele Hospital, Milan. Dr. Pergoli is is co-founder and past president of WRISTH - World Research Institute for Sport Traumatology of the Hand and founder and Secretary General of the International Society for Sport Traumatology of the Hand (ISSPORTH). He is President of the Fight 1 Italian National Medical Commission. In 2015 he received from His Highness the Sultan of Pahang, Malaysia, the Honorary Fellowship Award at the World Congress of Sports and Exercise Medicine. He is member of the Editorial Board of the Journal of Hand Surgery, Asian Volume. He is the author of more than 100 scientific articles and book chapters; he is also co-author of the Italian Textbook of Hand Surgery.

Gregory I Bain is the current Professor of Upper Limb surgery and Research at the Department of Orthopaedic Surgery, Flinders University and Flinders Medical Centre, Adelaide, South Australia. He completed his Orthopaedic Surgery training in Adelaide, Australia and a clinical fellowship at the Hand and Upper Limb Unit in London, Canada with Drs Jim Roth, Graham King, Stuart Patterson and Robert Mc Farlane. Prof. Bain is the President-elect of ISSPORTH; Chairman of the ISAKOS Elbow, Wrist and Hand Committee; President-elect of Asian Pacific Wrist Association; Deputy Editor of Journal of Wrist Surgery; Editorial board member of Journal of ISAKOS and Journal of Techniques of Hand and Upper limb Surgery. He is an Executive Committee member of the Shoulder and Elbow Society of Australia and Australian Hand Surgery Society and former President Shoulder and Elbow Society of Australia. He has edited books on upper limb disorders, more than 100 publications, and many book chapters. He has been awarded the Australian Orthopaedic Association Research Award 2009 for "Producing outstanding Orthopaedic research that has international recognition, and research contributing to the orthopaedic community and the community generally". He has been honoured with the Terry Whipple Award by the Presidential Council of the European Wrist Arthroscopy Society for "his contribution in the advancement of knowledge in wrist arthroscopy".