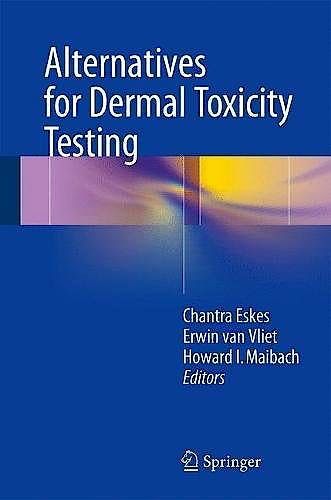 · Provides in-depth information on the alternatives to animal testing
· Identifies the most suitable test method(s) for specific uses and endpoints
· Describes the regulatory acceptance, protocols, performance, limitations, and applicability of each method
· Explains the role of individual methods within testing strategies

This book provides comprehensive information on the alternative (non-animal) dermal toxicity test methods currently available for industrial, regulatory, and academic use and also explores potential future developments. It encompasses all areas of dermal toxicity, including skin irritation, skin corrosion, skin sensitization, UV-induced effects, and skin genotoxicity. An individual chapter is devoted to each test method, with coverage of the scientific basis, validation status and regulatory acceptance, applications and limitations, available protocols, and potential role within testing strategies. In addition, perspectives from the test developer are presented, for example regarding critical steps in the protocol. The closing section addresses areas that may be of relevance for the future of dermal toxicity safety testing, including the validation and regulatory acceptance of integrated testing strategies, novel complex skin models, and high-throughput screening techniques.

Chantra Eskes, PhD, Eng, has around 20 years of experience in the development, optimization, and validation of alternative methods to animal testing. Her activities have contributed to the formal validation and regulatory acceptance of several test methods and to the development of a number of official international test guidelines. Dr. Eskes acts as a Nominated Expert and co-chair for the OECD in the areas of eye irritation/corrosion, skin irritation, skin corrosion, and skin sensitization. She is also President of the European Society of In Vitro Toxicology (ESTIV) and Executive Secretary of the Animal Cell Technology Industrial Platform (ACTIP). She is manager and consultant at SeCAM, a limited company that offers independent consultation and services on alternative methods for scientific, regulatory, and industrial tailored requirements. She is the editor, author, or co-author of more than 35 published scientific articles and book chapters and acts as a reviewer for several journals in the field of in vitro toxicology.

Howard I. Maibach, MD, is Professor of Dermatology in the School of Medicine, University of California, San Francisco. He is a leading authority in the fields of dermatotoxicology and dermatopharmacology, in which, over several decades, he has conducted much original research relating to skin diseases and the development of skin-related products. He has written very extensively, with a total of more than 2,000 publications as lead or co-author and over 80 textbooks. Professor Maibach has served on the editorial boards of more than 30 scientific journals and is a member of many professional societies, including the American Academy of Dermatology and the International Commission on Occupational Health. He is a consultant to government agencies, universities, and industry. He has been the recipient of numerous honors, both in the United States and overseas.

João Barroso, PhD, worked for several years at the European Centre for the Validation of Alternative Methods (ECVAM) of the Joint Research Centre (JRC) of the European Commission in the key area of topical toxicity, covering the human health effects of phototoxicity, skin absorption, skin corrosion, skin irritation, and eye irritation. He was involved in the coordination of validation studies of alternative test methods/strategies and provided support to the international regulatory acceptance (EU, OECD) of validated test methods/strategies. In October 2011 Dr. Barroso joined SeCAM, where he worked for 2 years as a senior consultant, acting as Cosmetics Europe Project Manager on Alternatives to Animal Testing and supporting the OECD in activities in the areas of skin and eye corrosion and irritation. In November 2013 he moved back to the European Commission JRC, as a Scientific Officer at the Systems Toxicology Unit/European Union Reference Laboratory for Alternatives to Animal Testing (EURL ECVAM).

Erwin van Vliet, PhD, has more than 10 years of research experience during which he has acquired a strong scientific background in the field of in vitro toxicology. He has been involved in the writing and management of European research projects and formal validation studies. Dr. van Vliet worked for several years at EURL ECVAM in Italy and then gained professional experience at the Johns Hopkins Center for Alternatives to Animal Testing (CAAT) in Baltimore, USA, where he was responsible for setting up a new research laboratory and published a review article on toxicity testing for the 21st Century, awarded best main article by ALTEX. In 2010, he joined the Fetal Medicine Research Group in Barcelona,

Spain, and since 2013 he has worked as an independent consultant in the field of in vitro toxicology and alternative methods. He acts as the Scientific Coordinator of the Cosmetics Europe Skin Tolerance Task Force, which is developing a testing strategy for skin sensitization and supports various scientific projects of SeCAM.