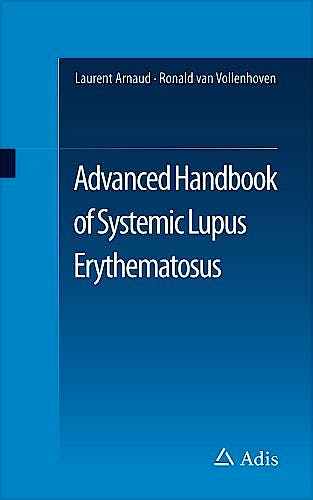 This book will provide an introduction to the epidemiology, etiology and pathogenesis of the condition while also exploring the classification, diagnosis, and current and emerging therapies for systemic lupus erythematosus. Systemic lupus erythematosus is an autoimmune disease in whichthe body's immune system mistakenly attacks healthy tissue. It can affect the skin, joints, kidneys, brain, and other organs. The underlying cause of the disease is not fully known, and SLE is much more common in women than in men. It may occur at any age but most often occurs inpeople between 10 and 50 years of age. This is the second Adis title from Ronald F van Vollenhoven who previously authored Biologics for the Treatment of Rheumatoid Arthritis.

Professor Ronald F van Vollenhoven is Chief of the Unit for Clinical Therapy Research, Inflammatory Diseases (ClinTRID) at the Karolinska Institute, and of the Clinical Trials Unit Rheumatology at the Karolinska University Hospital. He received his MD and PhD degrees from theUniversity of Leiden in The Netherlands. After graduating in 1984 he pursued immunology research at Cornell Medical College in New York, followed by a residency (specialty training) in internal medicine at the State University of New York at Stony Brook, and a fellowship in rheumatology at Stanford University in Palo Alto following which he received American Board of Internal Medicine certification in both internal medicine and rheumatology. From 1993 to 1998 Professor van Vollenhoven held a faculty appointment as Assistant Professor of Medicine in the Division of Immunology and Rheumatology at Stanford University, and from 1995 he was the Medical Services Chief and Fellowship Director in that division. In 1998 Professor van Vollenhoven moved to Stockholm, Sweden, where he worked as a Senior Physician and Chief of the Clinical Trials Unit in the Department of Rheumatology at the Karolinska University Hospital and Associate Professor of Rheumatology; and in 2010, he was appointed in his current position as Professor and Unit Chief at the Karolinska Institute. Professor van Vollenhoven’s research interests focus aroundthe development and systematic evaluation of biologic and immunomodulatory treatments for the rheumatic diseases. With his co-workers, he has established the Stockholm registry for biological therapies (the STURE database) for this purpose, which has supported research projectsrelating to clinical efficacy, pharmacology, outcomes, and pharmacoeconomics. He has been principal investigator in many clinical trials of novel therapies in rheumatic diseases and has contributed to a number of important investigator-initiated trials including the SWEFOT trial. He has published over 240 original papers, book chapters and reviews, and is Editor of the textbook Targeted Treatment of the Rheumatic Diseases and associate-editor of Dubois’ Lupus Erythematosus. In 2004, Professor van Vollenhoven was awarded the Scandinavian Research FoundationPrize for excellence in clinical research in rheumatology, and he is an honorary member of several rheumatology societies. He is the Editor-in-Chief of Lupus Science & Medicine, Chair of the EULAR Standing Committee on Clinical Affairs, member of many editorial boards, past-chair of the Swedish Rheumatology Society Professors’ Council, co-founder of the IRBIS registry for biologics in systemic lupus erythematosus (SLE), the CERERRA registries collaboration, and the NORD-STAR collaboration for Nordic trials in the rheumatic diseases, and the initiator of theTreat-to-Target-in-SLE initiative. Professor van Vollenhoven lives just north of Stockholm with his wife and children aged 20 and 16. Outside his professional life he is an avid classical pianist.