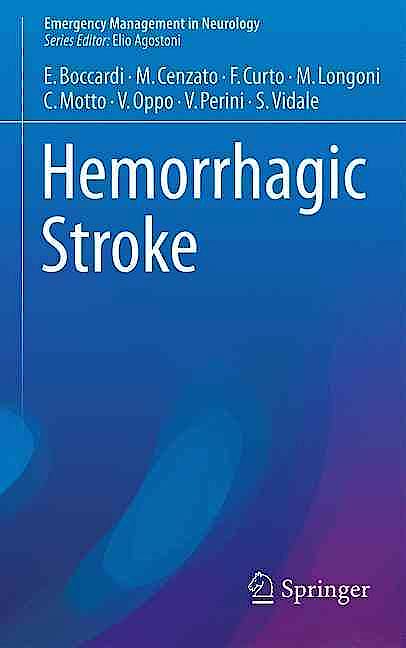 This book provides detailed practical guidance on the management of hemorrhagic stroke in the clinical settings encountered in daily practice. Real-life cases are used to depict a wide range of clinical scenarios and to highlight significant aspects of management of hemorrhagic stroke. In addition, diagnostic and therapeutic protocols are presented and helpful decision-making algorithms are provided that are specific to the different professionals involved in delivery of stroke care and to differing types of hospital facility. The coverage is completed by the inclusion of up-to-date scientific background information relevant to diagnosis and therapy. Throughout, the approach adopted is both practical and multidisciplinary. The book will be of value for all practitioners involved in the provision of stroke care, and also for medical students.

Provides detailed practical guidance on the management of hemorrhagic stroke

Eduoardo Boccardi gained his MD in 1978 at the University of Milan, Italy, and then completed specializations in Neurology and Radiology. He has been a member of the Neurosurgical Department of Niguarda Ca’ Granda Hospital, Milan since 1981 and a full-time interventional neuroradiologist since 1990. He has been Director of Interventional Radiology at Niguarda Ca’ Granda Hospital since 2002 and in 2009 was appointed Director of the Department of Neuroradiology. On average he attends 400 procedures for the treatment of intra- and extracranial vascular diseases each year, as principal operator or tutor.

Francesco Curto is an attending physician at Niguarda Ca’ Granda Hospital, Milan and has been responsible for coordination of the Neurocritical Care Unit since 2013. He graduated in 2002 from the University of Milan and then specialized in Anesthesia and Critical Care. He also spent 2 years as a Visiting Fellow at National Institutes of Health (NIH), Bethesda, MD, USA.

Marco Longoni completed his medical studies at the University of Milano-Bicocca, Italy, in 2001 and then undertook a residency and fellowship in Neurology at the university. He has also since completed a fellowship in Radiology. He currently works at the Niguarda Ca’ Granda Hospital in Milan, having previously been a neurologist in the Neuroscience Department at Lecco Hospital, Italy (2007–14).

Cristina Motto graduated in Medicine and Surgery at the University of Milan in 1990 and completed her specialization in Neurology at the university in 1995. Since 2008 she has been a member of the Stroke Unit of Niguarda Ca’ Granda, Milan. She is also a Lecturer on the Nursing Degree in the Faculty of Medicine, University of Milan, and a Member of the Clinical Committee of the Cochrane Neurological Field.

Valentina Perini completed her degree in Medicine and Surgery at the University of Palermo, Italy, in 2008. She entered the Neurology residency program at the university in 2011 and since April 2015 has been undertaking a traineeship in the Stroke Unit at Niguarda Ca’ Granda Hospital in Milan.

Simone Vidale graduated in Medicine and then specialized in Neurology at the University of Insubria, Varese, Italy. He currently works in the Department of Neurology, Sant’Anna Hospital, Como, Italy, focusing on strokes, neurological emergencies, and Alzheimer’s disease and other dementias. He served as National Secretary of the Italian Association Against Stroke from 2007 to 2009 and was co-author of chapters on risk factors and primary prevention in the Italian Stroke Guidelines.