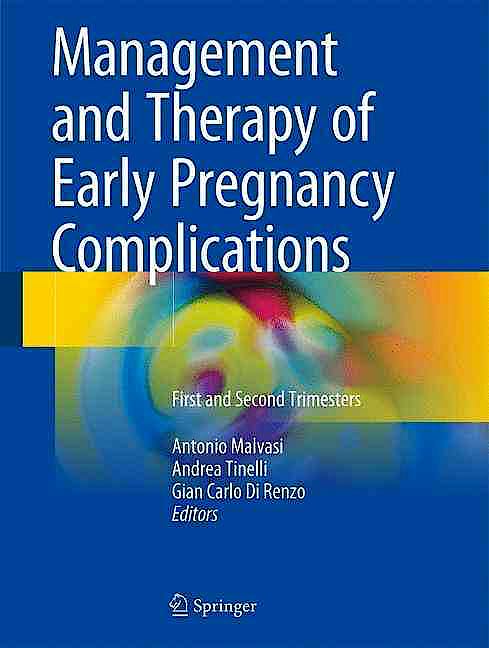 This richly illustrated book draws on recently acquired knowledge to provide the reader with comprehensive, up-to-date information on the full range of obstetric complications that may be encountered during the first and second trimesters of pregnancy.

For all complications, including those potentially involved in malpractice issues, risk factors and clinical presentation are described and detailed guidance is provided on the appropriate treatment. The lucid text is complemented by a wealth of images, diagrams, flow charts, and drawings. The volume has been compiled in collaboration with a large group of gynecologists, obstetricians and internationally renowned scientists to provide an essential guide.

Accordingly, this book will be a valuable tool for every obstetrician and gynecologist. Practitioners across the world will be enabled to deepen their knowledge and to refine their approach to complications in daily clinical practice.

Antonio Malvasi graduated in Medicine in 1983 with first-class honors from the University of Bari, Italy, where he subsequently completed his specialization in Obstetrics and Gynaecology with honors. In 1991, he also completed specialization in Biochemical and Biophysical Monitoring of the Fetus at the University of Bari. Since 2002 he has been Senior Assistant in the Gynecology and Obstetrics Department of “Santa Maria” Hospital, Bari. Dr. Malvasi is a NESA diplomat and partner. He is Adjunct Professor in the International Translational Medicine and Biomodelling Research Group, Department of Applied Mathematics, Moscow Institute of Physics and Technology, Russia and Visiting Professor at the Department of Gynecology and Obstetrics, University of Perugia, Italy. From 2005 to 2008 he was Director of the Medical Drawing School at the Sapienza University of Rome. He is the author of six textbooks, more than 140 papers in high-ranked journals, and 30 book chapters.

Italy, as Chief of the Division of Experimental Research in Endoscopic Surgery, Imaging, Minimally Invasive Technology, and Therapy (ObGyn Department). From January 2014, he has held National Authorization as an Associate Professor in Obstetrics and Gynecology, and he is Adjunct Professor at the Moscow Institute of Physics and Technology (MIPT), Russia, as a member of the International Translational Medicine & Biomodeling Research Team. Dr. Tinelli is also a permanent Board Member of the Committee on Experimental Oncological and Pathological Medical Research at the University of Salento, Italy. He is the author or co-author of five books, more than 350 papers in peer-reviewed medical journals, and 30 textbook chapters. He is an active member of national and international scientific and professional associations and is an editorial board member of various scientific journals.

and for the European Union. He has served as President of the European Association of Perinatal Medicine, General Secretary of the Italian Society of Perinatal Medicine, and President of the Italian Society of Ultrasound in Obstetrics and Gynecology. Since 2009 he has been Vice-President of the World Association of Perinatal Medicine. In 2011 he became an Honorary Fellow (ad eundem) of the Royal College of Obstetricians and Gynaecologists and in 2012 was made Honorary Secretary of the International Federation of Gynecology and Obstetrics (FIGO) in London. Dr. Di Renzo has been the recipient of several national and international awards. He has published more than 1100 papers, including more than 300 in refereed international journals, as well as 70 books.