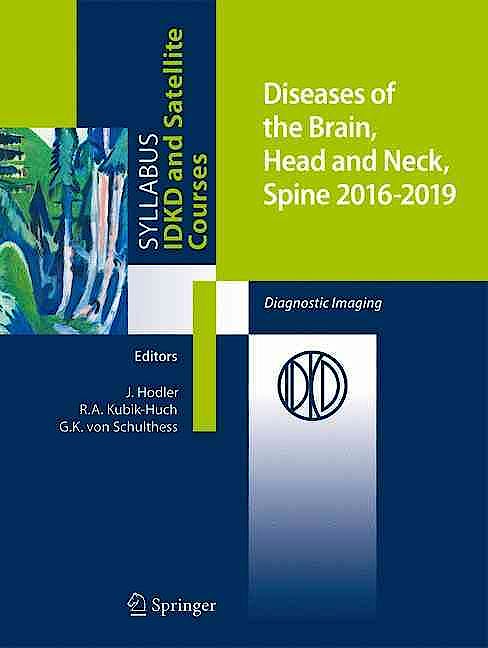 This book deals with neuroimaging of the brain, head, neck, and spine. During the last few years, there have been considerable advances in this subject, driven by clinical as well as technological developments. The authors, internationally renowned experts in their field, have contributed  chapters that are disease-oriented and cover all relevant imaging modalities, including magnetic resonance imaging, computed tomography, and positron emission tomography. As a result, this book offers a comprehensive review of the state of the art in neuroimaging. It is particularly relevant for general radiologists, radiology residents, neurologists, neurosurgeons, and other clinicians wishing to update their knowledge in this discipline.

Jürg Hodler is Professor of Radiology and Chairman at the Radiology University Hospital in Zurich, Switzerland. He also serves as the Chief Medical Officer of the University Hospital in Zurich. As far as his scientific activity is concerned, he has published more than 240 original papers, mostly in the field of musculoskeletal radiology. He has served as a Co-Editor for the journal of Skeletal Radiology for 10 years and has been active in several scientific societies, currently mainly in the International Skeletal Society. Last but not least, he is Co-Director of the International Diagnostic Course in Davos.

Rahel A. Kubik-Huch is head of the Institute of Radiology and the Department of Medical Services and member of the executive board at the Kantonsspital Baden in Switzerland. She has a strong interest in female imaging with expertise in all imaging modalities and imaging-guided minimal invasive breast interventions. She is Deputy Editor for European Radiology, a member and past president of the executive board of the Swiss Society of Radiology as well as member of the core team (scientific advisor) and course organizer of the MIBB (minimal invasive breast biopsies) working Group of the Swiss Society of Senology. She is a course Co-Director of the International Diagnostic Course Davos (IDKD), Course Advisor of the Breast Imaging Satellite Course Pearl of the IDKD and a former organizer of the Advanced Breast and Pelvis Imaging Course of the ESMRMB where she remained a member of the faculty. She has published numerous research articles in peer-reviewed journals, contributed to several book chapters and has been an invited speaker in her area of expertise at a number of national and international symposia and meetings.

Gustav K. von Schulthess is internationally known as a pioneer in hybrid imaging (PET/CT, SPECT/CT and PET/MR), leader and visionary. He got his MD from Harvard Medical School and his PhD in Physics in 1980 and is doubly board certified in Radiology and Nuclear Medicine, obtaining his formation in Zurich, St. Gallen and San Francisco. He was the president of the European Society of Magnetic Resonance in Medicine and Biology and is an honorary member since 1996. He served as president of the Swiss Society of Nuclear Medicine from 1996 to 1999 and 2012 to 2014. He received an honorary degree in medicine from the University of Copenhagen in 2007 and became Honorary Member of the Radiological Society of North America in 2008. He was the director of Nuclear Medicine at the University Hospital Zurich (USZ), Switzerland from 1991 until 2014, Chief Medical Officer of USZ from 2005 to 2007 and Department Chair of Medical Radiology from 2011 to 2014. He stepped down from his duties in 2014 and currently is an advisor to Nuclear Medicine at USZ as well as to GE Healthcare. Last but not least, he has been one of the directors of the International Diagnostic Course in Davos (IDKD), Switzerland since 1995, where he strongly helped bringing IDKD to Asia and in the future to South America.