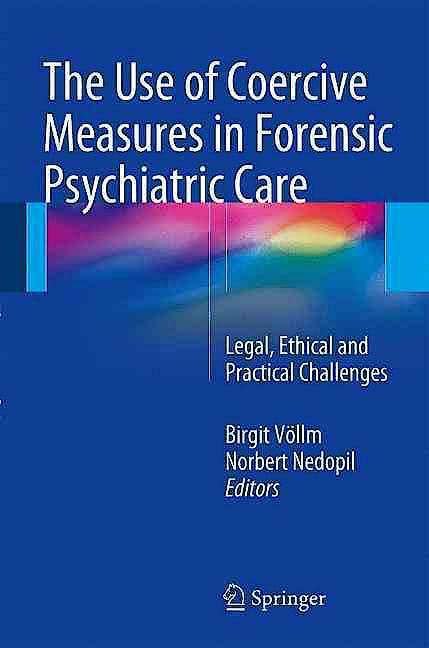 The Use of Coercive Measures in Forensic Psychiatric Care. Legal, Ethical and Practical Challenges

This book presents the legal context and describes the ethical and practical challenges when using coercive measures in forensic psychiatric settings. A wide range of aspects relevant to the use of such measures, including environmental, patient-related, and staff-related factors, are explored, and the experience of coercive interventions is described from the staff and the patient perspective. Differences in jurisdictions and examples of good practice are highlighted. The authors are from a range of professional backgrounds, ensuring breadth as well as depth in discussion of the topic.

The use of coercive measures, in particular restraint, seclusion, and involuntary medication, for the control of aggression in psychiatry remains controversial. Forensic mental health care deals with individuals who pose a risk to others and often present with significant management problems within institutions. The care of patients in these settings gives rise to debates about the balance between care and safety, and between the interests of the patients and those of the wider society to be protected. Despite these tensions, limited research has been conducted specifically on the use of coercive measures in forensic mental health care. This volume aims to fill the gap and will be of value to all professionals working in forensic psychiatric settings as well as to those working in general psychiatric and custodial settings, law professionals, and patients.

Birgit Völlm is Professor in Forensic Psychiatry at the University of Nottingham (UoN) and an Honorary Consultant Forensic Psychiatrist in the Enhanced Service for Personality Disorders (previously Dangerous & Severe Personality Disorders) at Rampton high secure hospital in the UK. She is the Head of the Section of Forensic Mental Health of the Division of Psychiatry of the UoN. Prof Völlm is the Chair of the Forensic Section of the European Psychiatric Association and the Secretary of the Forensic Section of the World Psychiatric Association. She was one of the experts on the NICE guidance group on the management of violence.

Her main research interests include the neurobiology of antisocial personality disorders and social cognition, treatment of personality disorders, service development and comparisons between service delivery in different European countries. She currently holds national and European grants on long-stay in forensic settings, the effectiveness of Individual Placement Support for forensic patients and on Circles of Support and Accountability for the reintegration of sex offenders into the community. She has published over 70 scientific papers and book chapters.

In 1989 he became professor and head of the Department of Forensic Psychiatry at the University of Würzburg and consultant for the treatment program in the regional forensic hospital. In 1992 he changed the University of Munich to head the Department of Forensic Psychiatry. He also continued to supervise the educational program of the high security hospital of Straubing, which he had started in 1990.

His special scientific interests included "Quality and improvement of quality of psychiatric assessments", "Differentiation and causes of human aggression", "Treatment of mentally disordered offenders", "Prediction of recidivism and management of mentally ill offenders in the community through continued care", "Ethical and legal questions pertaining to psychiatry"

(Past) Memberships: Board of Directors of the International Association of  Forensic Mental Health Services (IAFMHS). Chairman of the Committee on Ethical questions of psychopharmacological research of the AGNP (German association of Psychopharmacology). Chairman of the task force on the subspecialisation in forensic psychiatry of the DGPPN (German Psychiatric Association). Organizer of the continuous education program in Forensic Psychiatry and Psychology of the Interdisciplinary Work Group (Niederpöcking and Tutzing). Organizer and chairman of the Munich Forensic Fall Conference, the largest German speaking annual conference for Forensic Psychiatry. Organizer of the summer school of the Ghent Group, a European association of forensic psychiatrists.

He is author or editor of 12 books and more than 280 scientific publications. In 2007 he was awarded with the Beccharia Medal in Gold by the German, Swiss and Austrian Society of Criminology  (NKG) and with the Kraepelin-Alzheimer Medal of the University Hospital of  Munich.