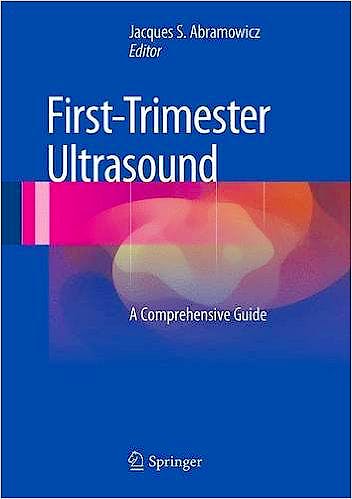 This book offers a unique and focused study of the use of ultrasound during the first trimester, a critical time in a fetus’ development. It includes basic examination guidelines as well as cutting-edge ultrasound modalities, including Doppler and three-dimensional ultrasound, for the period immediately preceding conception through early embryology. Beginning with a discussion of the safety and efficacy of diagnostic ultrasound and the use of this modality for the evaluation and treatment of infertility, recognized experts in the field explore conditions that may interfere with normal conception or development, including maternal diseases that would benefit from early scanning, elements of teratology, multiple gestations, ectopic pregnancy, gestational trophoblastic disease, fetal anomalies and invasive procedures in the first trimester. Numerous illustrations and figures are provided to serve as aids for understanding key concepts. First-Trimester Ultrasound is a valuable resource for many, in or after training, in obstetrics and gynecology, radiology, emergency medicine, family medicine and genetics.

Chapter 1. Ultrasound in the First Trimester and Earlier: How to Keep It Safe
Jacques S. Abramowicz