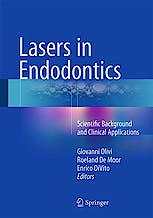 This book offers up-to-date information on all aspects of the use of lasers in endodontics, focusing especially on the various laser applications, including primary and permanent root canal therapies, retreatments, apical surgery and pulp therapy. Every laser technique used in endodontics is carefully described and illustrated, with detailed coverage of both conventional methods and more recent developments such as laser-activated irrigation and photon-induced photoacoustic streaming. In addition, a separate section addresses the basic science of laser dentistry, explaining the physics, describing laser–tissue interactions, and discussing different types of laser. Extensive reference is made to the international literature in order to provide the reader with a clear, evidence-based understanding of the merits of various approaches. In offering a balanced mix of descriptions of clinical applications, clinical data, scientific research and logical criticism, the book will serve as an excellent reference for a wide audience comprising general dentists as well as specialists.

Giovanni Olivi graduated in Medicine and Surgery from the University of Rome “La Sapienza”, Italy and subsequently specialized in Dentistry. In 2002 he completed the postgraduate laser course at the University of Florence; in 2006 he achieved Advanced Proficiency and in 2009 was awarded Master status by the Academy of Laser Dentistry (ALD). Dr. Olivi has served as an assistant professor at many Italian universities, including Florence, Rome, Parma and Genoa, where he has been a member of faculty for over 10 years. Dr. Olivi was the 2007 recipient of the Leon Goldman Award for clinical excellence from ALD. He is an active member of the Italian Academy of Microscope Dentistry (AIOM), the Italian Society of Endodontics (SIE) and the Italian Society of Pediatric Dentistry (SIOI), as well as ALD. He has lectured on laser worldwide and is the author of more than 60 peer-reviewed articles as well as the books Laser in Dental Traumatology (in Italian, 2010; Martina, Bologna) and Pediatric Laser Dentistry: a User’s Guide (in English, 2011; Quintessence, Chicago). Dr. Olivi maintains a private practice in Endodontics, Restorative and Pediatric Dentistry in Rome, Italy.

Roeland De Moor is an extraordinary full professor at Ghent University, where he was former Dean of the Dental School and is currently Director of the Dental Clinic. He is also Head of the Department of Restorative Dentistry and Endodontology and Director of the Ghent Dental Laser Center and the Ghent Dental Photonics Research Cluster. Professor De Moor is a founding member of the Belgian Association of Endodontics and Traumatology, of which he has been President or Vice-president eight consecutive times. He has received a number of honors and awards for his personal work and that of his research team. His research is focused especially on the use of laser technology in endodontics and for dental bleaching and on the use of light-activated nanoparticles for dental purposes, especially disinfection. Professor De Moor is a member of the editorial boards of the Journal of Endodontics, the International Endodontic Journal, the Journal of Adhesive Dentistry, and Endodontic Practice Today. He lectures both nationally and internationally and is the author of more than 100 peer-reviewed articles in international journals, most of them on the subject of dental laser.

Enrico DiVito is the founder and director of the state-accredited Arizona School of Dental Assisting in the United States. In addition to teaching at the school, he teaches as a clinical professor at the Arizona School of Dentistry and Oral Health and helped to create their Department of Laser Dentistry. Dr. DiVito earned his DDS at the University of the Pacific Arthur A. Dugoni School of Dentistry in San Francisco, California and subsequently established a private practice in Scottsdale, AZ. In addition to general and cosmetic dentistry, he is known internationally for his expertise in craniomandibular disorders and has advanced training in both hard and soft tissue laser application. In 2007, he moved his practice to North Scottsdale and established the Arizona Center for Laser Dentistry, where he employs the latest techniques and materials and utilizes cutting-edge technology. Dr. DiVito is the inventor of the PIPSTM technology. He also lectures both nationally and internationally and has published numerous articles in various dental journals, including on PIPSTM.