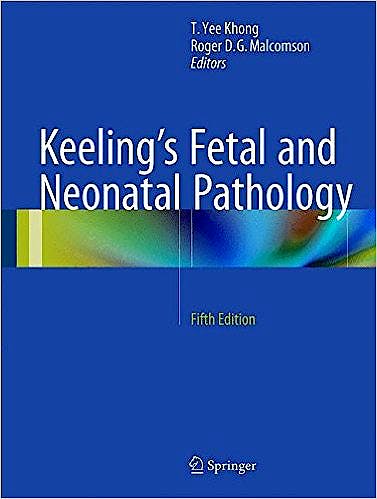 This fifth edition of a successful book provides an overview of fetal and perinatal pathology, concentrating on common problems, especially where the anatomical pathology findings guide the direction of further investigations.

A new feature of this edition is an emphasis on the molecular aspects of pathology in the perinatal setting. There are four new chapters, including one on the genetic and epigenetic basis of development and disease, and over 300 new illustrations. The format of the book remains the same as previous editions with the first half covering general areas in perinatal pathology. The second half is based on organ systems and covers specific pathological entities, now including discussion of the relevant molecular pathology. There is extensive cross-referencing between chapters.

Keeling’s Fetal and Neonatal Pathology, 5th edition is aimed at the practising pathologist who is called upon to provide a perinatal pathology service. It is also a valuable resource for the pathology trainee and a reference for obstetricians, maternal and fetal medicine specialists, neonatologists, paediatricians and forensic pathologists.

Dr Khong qualified from the University of Sheffield Medical School. He started his pathology training at Royal Free Hospital, London and then commenced research into normal and abnormal human placentation at St George's Hospital Medical School, London. He completed his training at John Radcliffe Hospital, Oxford in the United Kingdom, subspecialising in perinatal/paediatric pathology. He was a recipient of an American Cancer Society Eleanor Roosevelt International Cancer Research Fellowship awarded by UICC. He is currently Senior Consultant Pathologist in SA Pathology, Women's and Children's Hospital, North Adelaide, and Clinical Professor in the Department of Pathology, and Department of Obstetrics and Gynaecology, University of Adelaide. He was formerly President of the Royal College of Pathologists of Australasia.

Dr Malcomson studied medicine at the University of Edinburgh, Scotland, whilst intercalating an Honours science degree and a PhD in experimental pathology, pursuing research interests in the molecular and cellular biology of apoptosis. Postgraduate medical training in Histopathology followed and he completed subspeciality training in Paediatric and Perinatal Pathology. Subsequently, he was appointed as Consultant Paediatric Histopathologist at the Birmingham Children’s Hospital and is currently a Consultant Paediatric and Perinatal Pathologist at the Leicester Royal Infirmary. Dr Malcomson has managed the websites of both the Paediatric Pathology Society and the International Paediatric Pathology Association and is the Organiser of the British and Irish Paediatric Pathology Association’s Paediatric Histopathology External Quality Assurance Scheme.