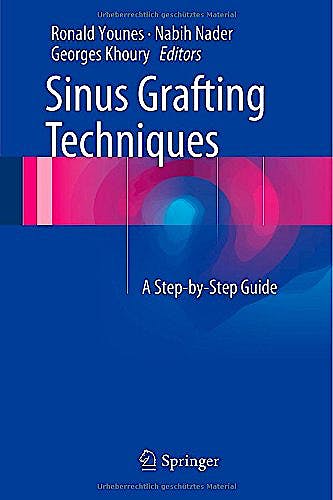 Placement of endosseous implants in the posterior maxilla is often difficult because of a lack of supporting bone. Sinus augmentation procedures have therefore been extensively used for the treatment of the edentulous atrophic posterior maxilla prior to implant placement. This book describes in detail the most widely used sinus grafting techniques as well as some innovative variations, with full coverage of both lateral and crestal approaches. A key aim is to assist the practitioner in selecting the appropriate sinus grafting technique based on the evaluation of a number of parameters that are described in detail and codified in a simple and practical way. Up-to-date information is also provided on grafting materials and on potential complications of sinus augmentation procedures and their treatment.

Ronald Younes gained his DDS from the Faculty of Dentistry, St Joseph University, Beirut, Lebanon in 1992. For almost two decades he has worked in private practice relating to oral surgery, periodontics, and implant dentistry. In 2009 he was awarded his PhD by St Joseph University and Paris-Descartes University. Dr. Younes was a Senior Lecturer in the Department of Oral Surgery in the Faculty of Dentistry at St Joseph University from 2008 to 2011, when he was appointed Assistant Professor. He is also a part-time researcher in the Laboratory of Physiopathology of Non-mineralized Tissues in the Faculty of Medicine, University of Paris, France. From 2009 until the end of 2012, Dr. Younes was Chairperson of the Scientific Committee of the Lebanese Dental Association. He is also a founding member and Chairperson of the Scientific Committee of the Lebanese Society of Oral Surgery. Dr. Younes has led five courses at the Zimmer Institute in Winterthur, Switzerland.

Georges Khoury was awarded his DDS by the University of Nantes in 1987 and he has since specialized in implantology. After working in the Department of Implantology, Faculty of Medicine, Lille University II, Dr. Khoury joined the Implantology Unit, Faculty of Dental Surgery, University of Paris VII in 2002, where he has had responsibility for pre-implant bone reconstruction and is now scientific director of the Pre-Implant Bone Reconstruction Clinic. Dr. Khoury also works in private practice, specializing in implant surgery.From 2008 to 2010, Dr. Khoury served as President of the Société Française de Dentisterie Esthétique (French Society of Aesthetic Dentistry). He is also a member of the French Society of Oral Surgery and the French Implantology Association and an associate member of the American Academy of Implant Dentistry.

Nabih Antoine Nader gained his BDS in 1993 from Section II of the Lebanese University and then gained further qualifications in clinical periodontology, prosthodontics, and oral surgery from University of Paris VI and VII. Dr. Nader has worked in private practice at the Far Vision Center, Beirut, Lebanon since 1996, specializing in periodontology, implantology, and oral surgery. Since 2006 he has also worked in the Oral Surgery Department at the Faculty of Dental Medicine, The Lebanese University. Dr. Nader is currently Chairperson of the Scientific Committee of the Lebanese Dental Association. He has given many oral presentations on topics in periodontology, implantology, and oral surgery at congresses and meetings in many countries, including Lebanon, Morocco, Tunis, Jordan, Germany, and Hungary.