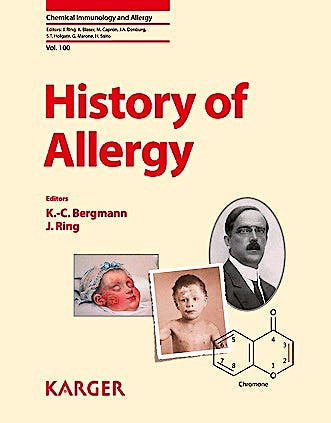 The prevalence of allergic diseases has increased dramatically over recent decades, both in terms of the number of sufferers and the number of allergies, so that they are often referred to as 'the epidemic of the 21st century'. As described in ancient texts, allergies have been known for over 2,000 years, but the term 'allergy' was coined only at the beginning of the 20th century when doctors began to understand their pathophysiological basis.

This book presents a detailed and varied historical overview of the field of allergology. Beginning with insights on allergy from antiquity to the 20th century and the development of terminology, it compiles historical reflections on the understanding of the most common allergic diseases. Important milestones in the discovery of mechanisms of allergy are described, followed by historical accounts of the detection of allergens such as pollen, mites, cat dander, peanuts and latex, and of environmental influences such as pollution or a farming environment. Several chapters chronicle the progress in allergy management. A special highlight of this book are personal reflections of and interviews with a number of pioneers of allergy, including F. Austen, J. Bienenstock, K. Blaser, A. de Weck, A.W. Frankland, K. Ishizaka, and many more. Concluding with portrays of allergy societies and collections as well as two films, this book represents a veritable treasure trove of fascinating and richly illustrated information.

Not only researchers, physicians and medical historians but also students and even non-scientists should find 'History of Allergy' a scientific adventure worth reading.