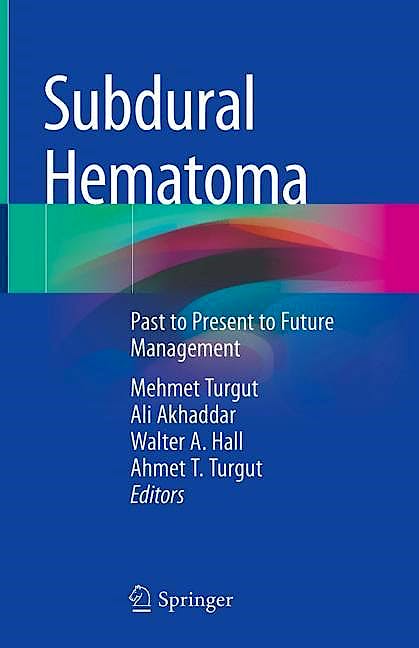 Subdural Hematoma. Past to Present to Future Management

This book provides an in-depth review of the current state of knowledge on the intracranial chronic subdural hematoma, with an emphasis on the etiology, risk factors, pathophysiology, anatomic pathology, epidemiology, clinical presentation, imaging findings, and treatment modalities, both medical and surgical. Sections on the postoperative complications, prognosis, and medicolegal aspects of this illness are also included. Lastly, the book considers future areas of investigation and innovative therapeutic philosophies.

This richly illustrated book will help the reader choose the most appropriate way to manage this challenging neurosurgical disease process. It is an ideal resource for neuroscientists at all levels, from graduate students to research scientists, including neurosurgeons, neurologists, neuroradiologists, and pediatricians, and for those seeking both basic and more advanced information regarding the craniospinal subdural hematoma, including acute, subacute and chronic ones.

Mehmet Turgut, MD, PhD, is Professor of Neurosurgery at Aydın Adnan Menderes University School of Medicine, Aydın, Turkey. He graduated from the Ege University School of Medicine, İzmir, Turkey and later specialized in neurosurgery in Hacettepe University Hospitals, Ankara, Turkey. In 2004, he received the PhD degree from the Department of Embryology and Histology, Ege University Health Sciences Institute, İzmir, Turkey. His fields of expertise and research interests are broad and include developmental neuroscience, pediatric neurosurgery, infectious diseases of the central nervous system, and peripheral nerve surgery. Dr. Turgut is an editorial board member for 25 international journals including European Spine Journal, Surgical Neurology International, Journal of Neurological Surgery Part A: Central European Neurosurgery, Journal of Spine, Journal of Pediatric Neurology, Journal of Brachial Plexus and Peripheral Nerve Injury, Journal of Spine & Neurosurgery, and Journal of Neurosciences in Rural Practice and a reviewer for a wide range of international journals and research programs. Dr. Turgut is the lead or co-author of more than 300 papers in peer-reviewed journals and about 65 book chapters and he is one of the editors in 15 books including Pituitary Apoplexy, Hydatidosis of the Central Nervous System: Diagnosis and Treatment, Complications of CSF Shunting in Hydrocephalus: Prevention, Identification and Management, The Chiari Malformations, The Sutures of the Skull: Anatomy, Embryology, Imaging, and Surgery.

Ali Akhaddar, MD, IFAANS, is Full Professor of Neurosurgery at the Medical School, Mohammed V University in Rabat (Morocco) and Head of the Department of Neurosurgery at Avicenne Military Hospital of Marrakech (Morocco) since 2013. He was an Expert Member of the Scientific Committees of the National Scientific and Technological Research Center of Morocco (CNRST) from 2011 to 2017. Dr Akhaddar is an International Fellow of the American Association of Neurological Surgeons (AANS), member of the Congress of Neurological Surgeons (CNS), the French speaking society of Neurosurgery (SNCLF), and the Rusian Academy of Natural History (RANH). His fields of expertise and research interests include central nervous system infections, spinal surgery, pituitary tumors, stereotactic surgery, history of medicine, and medical writing. He has received many awards during his career, including from the Moroccan Society of Neurosurgery (2007), the World Federation of Neurosurgical Societies [Traveling Fellowship Award: Nagoya 2007, Boston 2009 and Seoul 2013], the University of Mohammed V in Rabat (2011 and 2017) and the French Society of Hospitals’ History (SFHH) (2014). In 2020, he was awarded the COMSTECH Best Scientific Book award by the Organisation of Islamic Cooperation (OIC). Dr Akhaddar is the Associate Editor-in-Chief of Surgical Neurology International [Infection]. He is a reviewer for many medical journals including World Neurosurgery, Headache, BMC Infectious diseases, BMC Pediatrics, BMC Surgery, Scientif Reports, International Journal of Spine Surgery, Journal of Pain Research, Childs Nervous System, Ophthalmic Plastic and Reconstructive Surgery, and Journal of Neurosciences in Rural Practice. He is the author of ten previous books (five with Springer* and one translated into Chinese); and has authored and co-authored more than 300 papers published in peer-reviewed journals (189 indexed in PubMed*) (221 indexed in Scopus* Author ID: 22978603700, ORCID iD: http://orcid.org/0000-0001-5743-2777) and eighteen book chapters.

Walter A. Hall, M.D., MBA is Professor of Neurosurgery at the State University of New York Upstate Medical University in Syracuse, New York. Prior to his arrival in Syracuse in 2007, he was a Professor of Neurosurgery, Radiation Oncology, and Radiology at the University Of Minnesota School of Medicine and the Shelly N. and Jolene J. Chou Chair in Neurosurgery. Dr. Hall received his B.A. degree from Columbia College of Columbia University in 1979 and his M.D. degree from the College of Physicians and Surgeons of Columbia University in 1983. He completed his General Surgery Internship at the University of Pittsburgh in 1984 and his neurosurgical residency was completed at the University of Pittsburgh in 1990. During his training, he spent two years at the National Institutes of Health in the Surgical Neurology Branch as a Medical Staff Fellow from 1987 to 1989. He was the 1990 recipient of the Van Wagenen Fellowship of the American Association of Neurological Surgeons which he spent working in the Department of Tumor Biology of the Norwegian Radium Hospital in Oslo, Norway. Dr. Hall joined the faculty of the University of Minnesota School of Medicine in February 1991. In 1996 he was awarded the Mahaley Clinical Research Award in brain tumors by the Joint Section of Tumors of the Congress of Neurological Surgeons and the American Association of Neurological Surgeons. In 1998, Dr. Hall received his M.B.A. degree from the Carlson School of Management of the University of Minnesota. He was the Director of the Brain Tumor Center of Minnesota and has extensive clinical and laboratory experience in developing new therapeutic modalities for treating brain tumors. Treatment modalities for brain tumors that have been developed under Dr. Hall’s guidance include stereotactic radiosurgery, fractionated stereotactic radiotherapy, blood-brain barrier disruption chemotherapy, interventional magnetic resonance imaging-guided neurosurgery, and targeted toxin therapy. He performed more that 1,000 neurosurgical procedures using intraoperative magnetic resonance imaging guidance over from 1997 to 2007. In addition, Dr. Hall has authored more than 200 publications on brain tumors, targeted toxins, intraoperative magnetic resonance imaging-guided neurosurgery, and central nervous system infections.

Ahmet T. Turgut, MD, is Professor of Radiology at Yüksek İhtisas University Faculty of Medicine in Ankara, Turkey. He has nearly 25 years experience in the field of radiology with key roles in diagnostics, academics and administration. Dr. Turgut’s research interests include diagnostic and interventional oncologic imaging and the use of hybrid imaging techniques for the the diagnosis and treatment of cancers in particular. He has published more than 100 original papers in peer-reviewed journals and has authored 60 chapters in several textbooks in English. He is editor of three reference books published by Springer. Dr. Turgut has given more than 90 invited lectures at distinguished scientific meetings including the European Congress of Radiology and Annual Meetings of the American Institute of Ultrasound in Medicine (AIUM) and European Society of Urogenital Radiology (ESUR). He served as the Congress President in ESUR 2013, 20th Annual Meeting of the ESUR held in Istanbul, Turkey. He has been honored as an elected-fellow of the ESUR in 2006. He served as executive board member and general secretary of the Turkish Society of Radiology from 2011 to 2013.