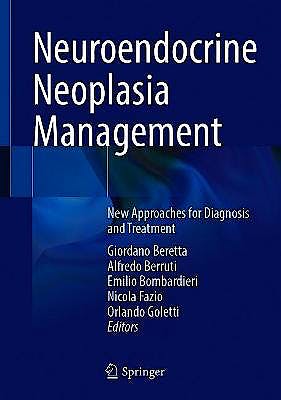 This book provides the most recent update on the management of neuroendocrine neoplasia (NEN), a term covering all tumors of various organs and/or with a particular histology, including MEN (multiple endocrine neoplasia) related tumors, MiNEN (mixed neuroendocrine-non-neuroendocrine neoplasms), NEC (neuroendocrine carcinoma) and Merkel's carcinoma. NENs are heterogeneous in their biology, clinical presentation and prognosis, showing a great variability in aggressiveness and therapy response. As a result, their treatment is based on a large spectrum of options. The standard therapies are surgery in early disease, various loco-regional procedures in certain conditions and mostly of a palliative nature in metastatic disease. At present, thanks to our increased understanding of molecular signaling pathways, several pharmacological approaches can be used in patients with advanced NENs. Somatostatin analogs display both anti-tumor effects and symptom control. Novel peptide-radio-receptor treatment (PRRT) is used in patients with well differentiated tumors. The agents targeting angiogenesis and/or PI3K/AKT/mTOR pathway, alone or in combination with analogues, have provided encouraging results in advanced disease.

The first part of the book focuses on the history, epidemiology and the most relevant scientific achievements, covering the discoveries in genetic and molecular biology, the endoscopic techniques with guided biopsy, and the metabolic imaging with hybrid PET/CT and MRI/CT. It particularly highlights the emerging strategies in therapy, surgery and mini-invasive surgery as well as loco-regional and systemic treatments, including targeted therapy and/or biological therapies. The second part then explores the management of NENs of various anatomical origins and/or with peculiar biology. It describes the range of the current options and the most relevant results from the clinical trials.

This informative book provides valuable insights for all those interested in the management of neuroendocrine neoplasia.

Emilio Bombardieri specialized in oncology and nuclear medicine at the University of Milan. In 1972 he joined the Istituto Nazionale Tumori, Milan, where he worked as a nuclear medicine Physician in the area of Oncology, Diagnosis and Therapy. He became Director of the Nuclear Medicine Division at the same institute in 1994 and Director of the Department of Diagnostic Imaging and Radiotherapy in 2007. In 2013 he was appointed Scientific Director of the Humanitas Gavazzeni Hospital, Bergamo and Coordinator of the Scientific Committee. Since 1982 he has been Professor of Physiology and Endocrinology at the Catholic University, ISEF, Milan. He was President of the Italian Association of Nuclear Medicine (AIMN); he chaired the EANM (European Association of Nuclear Medicine) Oncology Committee and was nominated President of the EANM Congress 2012 in Milan. He has published more than 400 papers in national and international journals, and scientific textbooks in the area of diagnostic imaging and oncology. He was an editor for several publications and Springer books. His interests include the diagnostic applications of nuclear medicine in oncology and cancer therapies with radiopharmaceuticals

Nicola Fazio specialized in internal medicine in 1993, and in oncology in 2003. In 2013 he received a PhD in Digestive Oncology. Currently he is the Director of the Division of Gastrointestinal Medical Oncology and Neuroendocrine Tumors and Director of the Program in Digestive and Neuroendocrine Tumors at the European Institute of Oncology, where he has been working since 1995. Since 2015 he has been Head of the IEO ENETS Center of Excellence for GEP NETs.

He was ESMO Faculty Coordinator for Neuroendocrine, Endocrine and CUP (2016-2019) and Chair of the first three editions of the ESMO NEN Preceptorship in 2017, 2018 and 2019. He also co-chaired the first edition of the ESMO NEN Advanced Course in 2019. Since 2013 he has coordinated the Italian (AIOM/ITANET) neuroendocrine neoplasms guidelines. Since 2015 he has been a member of the ENETS Advisory Board and in 2018 he was nominated Advisory Board Chairman.

Orlando Goletti spezialized in general surgery at the University of Pisa in 1991. From 1990 to 2000 he worked as an attending and senior surgeon at the General Surgery Department of the University of Pisa. He was an Associate Professor of General Surgery at the University of Pisa. From 2003 to 2012 he directed the Division of General Surgery at the Pontedera Hospital (Pisa) and from 2004 to 2012 he was Coordinator of the Cancer Department of ASL 5 Tuscany (Italy). Since 2016 he has been Director of the General Surgery Department at Humanitas Gavazzeni (Bergamo, Italy). He has authored over 500 scientific publications and (9 monographic editions, 12 book chapters, 120 papers at national and international journals, and more than 350 papers and videos presented at national and international conventions). His interests include laparoscopic treatment of NETs and the integration of surgery and ablative techniques (radiofrequency, microwave) in the treatment of metastatic NETs.