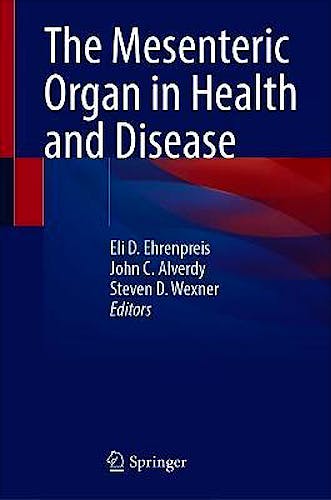 The Mesenteric Organ in Health and Disease

Recent discoveries and clarifications of known information about the mesentery have now established that these complex structures function together as an individual organ within the human body. As such, conditions that affect the mesentery can now be grouped within a single area of study and clinical practice.

The various aspects of mesenteric diseases have not been brought together in a single source and this book aims to bring them together for the first time. It will cover general areas such as anatomy, histology and physiology of the mesentery. A description of diagnostic procedures used to evaluate patients with mesenteric disorders will follow. A practical survey with detailed descriptions of medical, surgical, and neoplastic disorders of the mesentery is also be included.

This book is intended to be a guide for clinical practitioners including gastroenterologists, general surgeons, colorectal surgeons, primary care physicians, nurse practitioners and physician assistants who manage patients with mesenteric disorders.

Dr. Ehrenpreis is an internationally recognized expert in the fields of gastroenterology and clinical pharmacology. He is the author/editor of six books including Anal and Rectal Diseases: A Concise Manual and Radiation Therapy for Pelvic Malignancies and its Consequences; both published by Springer. Dr. Ehrenpreis has published more than 100 manuscripts on benign and malignant diseases of the gastrointestinal tract, pharmacokinetics, pharmacovigilance and analysis of big data. He is the Founding Director of the University Chicago (North Shore) Gastroenterology Fellowship training program and is the Founding Director of the Center for the Study of Complex Diseases. Dr. Ehrenpreis is a frequent lecturer at regional and national gastroenterology meetings. He has a particular interest in mesenteric panniculitis, a rare inflammatory disorder of the mesenteric organ and has served on an advisory role related to this condition for the National Organization for Rare Diseases and has been the medical advisor for the International Mesenteric Panniculitis Society for more than 20 years.

Dr. Alverdy is a nationally recognized expert in clinical gastrointestinal surgery. He has published more than 100 manuscripts on a variety of subjects including the surgical effects on the intestinal microbiome. Notable contributions to the field include the introduction of several new operations surgical procedures. Dr. Alverdy specializes in minimally invasive pancreatic surgery, bariatric surgery, and surgery for disorders of the foregut including the esophagus and stomach.

Steven D. Wexner, MD, PhD (Hon), FACS, FRCS, FRCS(Ed), is the Director of the Digestive Disease Center and Chairman of the Department of Colorectal Surgery since 1993. He previously served as Chief Academic Officer (2007-2012), Chief of Staff (1997-2007), and Chairman of the Division of Research and Education (1996-2007) at Cleveland Clinic Florida. Dr. Wexner has published over 550 manuscripts, more than 220 textbook chapters and more than 100 editorial and invited commentaries. He is the editor or co-editor of 26 textbooks or freestanding volumes to date and is a member of 34 editorial boards and a reviewer for an additional 31 journals. He is an active member of 41 learned societies and has held more than 35 appointed or elected offices in these societies. He is an honorary member of the surgical societies of eight other countries and has held over 40 visiting professorships and delivered over 1,270 scientific lectures.