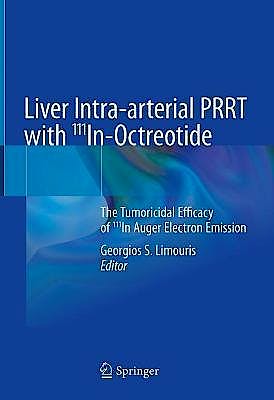 Liver Intra-arterial PRRT with 111In-Octreotide. The Tumoricidal Efficacy of 111In Auger Electron Emission

This book describes in detail a clinical project that reveals the tumoricidal efficacy of Auger and internal conversion electrons, emitted from n.c.a. 111In and implemented in oncology as a treating armamentarium for peptide receptor radionuclide therapy (PRRT), targeting small size (o 20 mm) tumors and micro-metastases.

The keen interest in n.c.a. 111In began when it was observed that its Auger electron emission could be highly radiotoxic, due to its high LET when it decayed in the vicinity of cellular DNA. The somatostatin analog octreotide, labeled with [111In-diethylenetriaminepentaacetic acid (DTPA0-D-Phe1)] is an established diagnostic agent for the imaging of somatostatin receptor-positive neuro- (or non-neuro) endocrine tumors. It relies on receptor-mediated binding, internalization and installation in the lysosomes in the proximity of the nucleus; administered in large doses, loco-regionally, via the feeding artery of solid tumors, can be highly radiotoxic if they over-express somatostatin receptors, mainly of the sst2 histotype.

The book compares the results between i.v. and i.a. implementation in more than 80 patients after over 800 i.a. infusions in neuroendocrine tumors, meningiomas, paragangliomas and colorectal carcinomas in a single Institute (Aretaieion University Hospital) and encourages the i.a. way, leading to "tumor melting", while minimizing the toxicity to healthy peritumoral liver tissue and critical organs (kidneys and bone marrow).

The volume is an invaluable tool for nuclear medicine physicians, interventional radiologists and oncologists dealing with radiopeptide therapies.

Georgios S. Limouris is a Nuclear Physician and Professor of Nuclear Medicine at the National and Kapodistrian University of Athens (NKUA). After beginning his medical studies at the Vienna University Medical School in 1967, he continued in Greece and received his MD from the NKUA in 1972 and his PhD (Habilitation) in 1974. A lecturer at the NKUA since 1989, he organized together with other colleagues annual Mediterranean Meetings for more than a decade, covering virtually all hot topics in Nuclear Medicine in a 13-volume series (Mediterra Publishers). Prof. Limouris is Vice-President of the Examination Committee for the specialty "Nuclear Medicine" and the Executive-Committee for "Radiopharmaceuticals," a member of the Editorial Board of the EJNMMI, and an Associate Editor of the Journal Frontiers in Oncology for Cancer Imaging and Diagnosis.

Prof. Limouris is the author of over 300 publications. Since 1997 he has intensively promoted Peptide Receptor Radionuclide Therapy in Greece, using Indium-111-pentetreotide almost exclusively intra-arterially. To date he has performed more than 1000 infusions, using an invention of his own dubbed the "Aretaieion Protocol" [Q J Nucl Med Mol Imaging, Nov-2012]. For his scientific contributions, in 2015 he was awarded the title of Scientific Advisor for Nuclear Medicine by "Aretaieion" University Hospital.