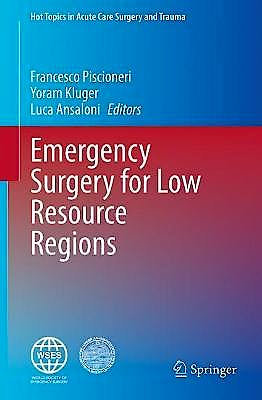 This book is aimed at surgeons faced with the immediate management of acute surgical problems in a variety of resource settings. The topics covered are common in both developed and developing countries as well as in tropical and non-tropical settings.

It also addresses the rational use of antibiotics and medications and the role of high dependency units. Each chapter includes a flow chart algorithm with multiple endpoints that relate to the resource situations available to the surgeon. The book is of interest to clinicians dealing with changes in acute surgery and the increasing disparity between developed and developing countries.

Francesco Piscioneri is a general surgeon and director of the acute surgical unit at Canberra Hospital. He has a teaching affiliation with the Australian National University Medical School and is supervisor of general surgical training in the Australian Capital Territory. From 1994 to 1999 he was the head of the Department of Surgery at the Fiji School of Medicine and team leader for an international aid project which set up a postgraduate training school. His main clinical interests are surgical oncology, acute surgery and the development of acute surgical and trauma services. He has fellowships in surgery from the Glasgow College of Physicians and Surgeons and from the Royal Australasian College of Surgeons and a Master of Orthopaedic Surgery degree. His research thesis was on the influence of HIV on the practice of orthopaedic surgery. Yoram Kluger graduated from the School of Medicine of the Hebrew University in Jerusalem and completed his general surgery residency at Hadassah Medical Center. He further trained in surgery at the Allegheny Medical Center in Pittsburgh, PA, USA. He was the founder and director of the Rabin Trauma Center at Tel Aviv Medical Center and established the first dedicated hospitalisation centre for polytrauma patients in Israel. He is recognised worldwide for his research on medical preparedness and medical infrastructure management in mass-casualty incidents.

Dr. Kluger's main interests are surgical oncology and trauma surgery. He is the medical director of the pancreatic surgery service at Rambam Health Care Campus and is currently the chairman of the Department of Surgery at the Bruce Rapport Faculty of Medicine of the Technion-Israel Institute of Technology. Dr. Kluger is the president of the Israeli Surgical Association and has recently been appointed as president of the World Society of Emergency Surgery (WSES; he is also scientific editor of the World Journal of Emergency Surgery.

Luca Ansaloni, MD is currently director of the General, Emergency and Trauma Surgery Dept. of Bufalini Hospital in Cesena (Italy) and Professor at the Milan University's General and Emergency Surgery Residency School. He has extensive experience in managing post-traumatic and non-post-traumatic open abdomen patients, and as a war surgeon in Africa and Afghanistan. He has authored hundreds of scientific articles and book chapters. He is past- president of the World Society of Emergency Surgery (WSES).