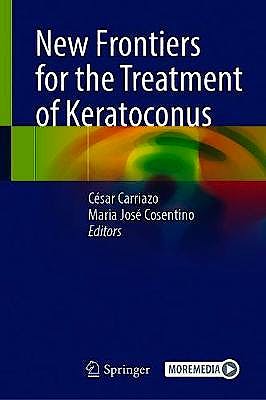 New Frontiers for the Treatment of Keratoconus

New Frontiers for the Treatment of Keratoconus represents an essential book for ophthalmologists and specialists in cornea and refractive surgery who are looking to position themselves at the forefront of the diagnosis and treatment of keratoconus.

Maria Jose Cosentino finished her studies with an average of 9.85 points and a gold medal and graduated from the University of Buenos Aires (BUENOS AIRES, ARGENTINA) with honors. She completed her Residency in Ophthalmology and was sub-specialized in Cornea and Refractive Surgery, with a clinical-surgical fellowship. She has developed more than 150 free papers and numerous collaborations and is the author of internationally published books. Many of these works have been awarded inside and outside of their country.

She has participated as lecturer, coordinator and director in numerous conferences held in Argentina and abroad. She is the Medical Director of Instituto de la Vision, in Buenos Aires. She works as an Assistant Professor at the University of Buenos Aires.She is PAST- President and Board Director of the Latin American Association of Surgeons of Anterior Segment (ALACCSA-R). She is Past-President of the Argentine Society of Cornea, Refractive Surgery and Cataract (SACRyC).

Maria is the Editor-in-Chief of the Scientific Newsletter ALACCSA-R, the most read digital latin magazine in its specialty in the world. She is Board Member of the journal of the American Society of Cataract and Refractive Surgery (EyeWorld). She is also a reviewer and member of the scientific committee of national and international medical consultation journals.

She is dedicated to clinical-surgical care, teaching and scientific research.

Dr. Carriazo studied at UNIVERSITY Del Norte in Barranquilla, Colombia, where he was graduated being the best of his class in School of Medicine. His residency training program in Ophthalmology was in Instituto Barraquer de America, where later he continued his fellowship in Cornea, Refractive Surgery and Cataract. During his fellowship, Dr. Carriazo also developed his first patent called the Carriazo-Barraquer Microkeratome.

In 1999, Dr. Carriazo founded a clinic specializing in Ophthalmology called Centro Oftalmologico Carriazo, currently known as Clinica Carriazo, where he has served until now as the Scientific Director and Chief of the Department of Anterior Segment. He is an active member of national and international congresses and courses, where he participates as speaker, professor, and moderator specialized in Anterior Segment.

Dr. Cesar Carriazo has published numerous books and medical articles rabout Cornea, Refractive Surgery and Cataract. He has more than fourteen patents around the world, and performs as the leader of plenty societies of Ophthalmology. He has been honored with multiple national and international awards for his scientific contributions: Among them are recognitions such as the Honor Award given by the Congress of Surgeons Ophthalmologists (Munich, Germany, 2003), the Golden Medal given by the Ministry of Health (India, 2005) Award to Scientific Merit given by the Colombian Association for the Science Advance (Colombia, 2013), Order of the Colombian Congress Knight Degree, among others.