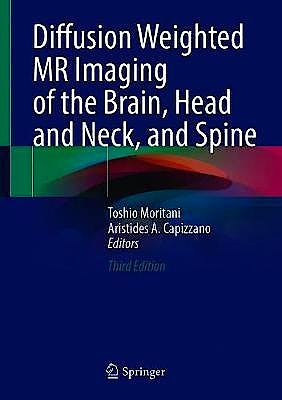 Diffusion Weighted MR Imaging of the Brain, Head and Neck, and Spine

This richly illustrated book, now in an updated and extended third edition, systematically covers the use of diffusion-weighted (DW) MR imaging in all major areas of neuroradiology, including imaging of the head and neck and the spine as well as the brain. The authors guide the reader from the basic principles of DW imaging through to the use of cutting-edge diffusion sequences such as diffusion tensor (DTI) and kurtosis (DKI), fiber tractography, high b value, intravoxel incoherent motion (IVIM), neurite orientation dispersion and density imaging (NODDI), and oscillating gradient spin echo (OGSE). Pathology, pathophysiology, and patient management and treatment are all thoroughly discussed.

Since the early descriptions by LeBihan and colleagues of the ability to image and measure the micromovement of water molecules in the brain, diffusion imaging and its derivatives have contributed ever more significantly to the evaluation of multiple disease processes. In comprehensively describing the state of the art in the field, this book will be of high value not only for those who deal routinely with neuro-MR imaging but also for readers who wish to establish a sound basis for understanding diffusion images in the hope of extending these principles into more exotic areas of neuroimaging.

Toshio Moritani MD, PhD is a Professor of Radiology, and serves as the Director of Clinical Neuroradiology Research at the University of Michigan. He received his medical degree and doctoral degree at Showa University in Tokyo, Japan. He worked at the Showa University Hospital in Tokyo and Saitama Children's Medical Center, Saitama. He came to the USA to work for the Strong Memorial Hospital, University of Rochester as a Research Assistant Professor in 1999, then he joined the University of Iowa as a clinical faculty member in 2004. After working for the University of Iowa as a Clinical Professor, he joined the faculty of the Department of Radiology at the University of Michigan in 2017. Dr. Moritani is Associate Editor in Neurographics. He has received more than 70 awards at National and International meetings. He has been awarded Honored Educator from the Radiological Society of North America, and Editor's Recognition Award from RadioGraphics, and Krabbenhoft Award for Excellence in Teaching from University of Iowa. He has published over 150 papers, written 26 book chapters, and presented over 400 scientific or educational presentations at National and International conferences, and more than 70 invited lectures.

Dr. Capizzano is a Clinical Associate Professor of Neuroradiology at the University of Michigan, who specializes in brain imaging. He has over 20 years of experience in clinical Neuroradiology as well as research experience in brain MRI applied to neurological diseases. Dr. Capizzano did his Radiology residency in his native Buenos Aires, Argentina. Later, he trained as a postdoctoral fellow with Dr. Michael Weiner's group at UCSF, where he researched applications of MR spectroscopy in dementia and epilepsy. Before moving to Michigan, he worked at the University of Iowa for 13 years. He published over 50 peer reviewed articles on Neuroradiology, mostly on clinical and methodological applications of MRI and MRS in Neurology and Psychiatry with emphasis on the pathology of the limbic lobe.