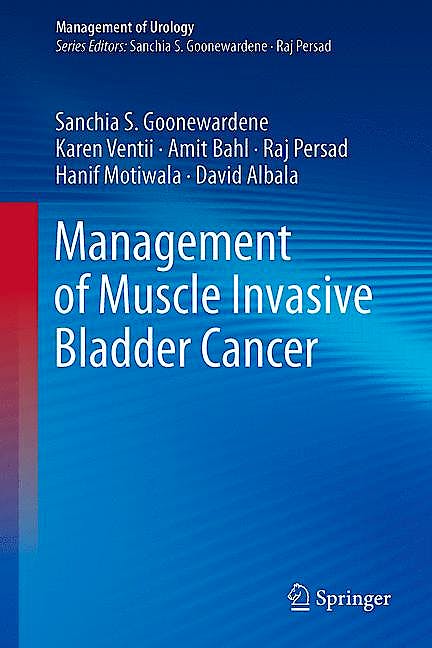 This book provides a systematic review of the management and treatment of this disease. The concise and highly structured chapters feature essential background knowledge and commentary on recent advances within each step of a range of patient pathways.

Management of Muscle Invasive Bladder Cancer provides a framework for patients' care based on the research, as well as practically and clinically oriented guidelines. This book is relevant to trainees and practicing urologists and oncologists, in addition to medical professionals involved in the treatment of bladder cancer.

Miss Sanchia S. Goonewardene, MBChB (Hons.Clin.Sc), BMedSc(Hons), PGCGC, Dip.SSc, MRCS (Ed and Eng) MPhil. Sanchia Goonewardene qualified from Birmingham Medical School with Honours in Clinical Science and a BMedSc Degree in Medical Genetics and Molecular Medicine. She has a specific interest in academia during her spare time, with over 627 publications to her name with 2 papers as a number 1 most cited in fields (Biomedical Library), and has significantly contributed to the Urological Academic World- she has since added a section to the European Association of Urology Congress on Prostate Cancer Survivorship and Supportive Care and is an associate member of an EAU guidelines panel on Chronic Pelvic Pain. She has been the UK lead in an EAU led study on Salvage Prostatectomy. She has also contributed to the BURST IDENTIFY study as a collaborator. Her background with research entails an MPhil, the work from which went on to be drawn up as a document for PCUK then, NICE endorsed. She gained funding from the Wellcome Trust for her Research Elective. She is also an Alumni of the Urology Foundation. She is an Editorial board member of the World Journal of Urology and was invited to be Guest Editor for a Special Issue on Salvage Therapy in Prostate Cancer. She is also a review board member for BMJ case reports. Most recently she has been a ICS Ambassador, ICS Mentor, ICS abstract reviewer and has been a Session Chair at YAU-ERUS, where she has presented her work.

Mr Hanif Motiwala, MB, BS, MS, FRCS (Edin)), FRCS (Urol),. Mr Hanif Motiwala is a Senior Pelvic and Reconstructive Urologist working at Southend University Hospital and Essex Cancer Centre. He has spent over 25 years in Pelvic surgery with 1000+ pelvic operations comprising both radical and salvage surgeries. He is well known to the urology community worldwide. He was Professor of Urology in India and has also served as an FRCS Urol Examiner. He has been training Programme Director for the London Deanery, Imperial Rotation, and was well liked by all of his trainees. He has also been a Lecturer for Institute of Urology and Oxford Trainees. He has extensive exposure to senior leadership roles within healthcare provision and professional institutions including Associate Medical Director and Chairman of the surgical division at Wexham Park Hospital. He also has a strong track record of achieving clinical targets within tightly controlled budgets, developing innovative strategies to improve patient care and optimise use of resources, for which he received a Bronze Award. He is a dedicated and committed surgeon, utilising teaching, surgical and medical skills for the greater good through international voluntary work, building capability and skills in reconstructive surgery in India and Africa. He was conferred a position as Visiting Professor - University of Khartoum, Sudan, 2009 in recognition of voluntary work in Sudan, conducting final Urology Examinations to train qualified surgeons, providing training to surgeons in reconstruction and carrying out complex surgery. His other interests are in area of Reconstruction and Andrology.

Prof Raj Persad, MB, BS, ChM, FRCS (Eng), FRCS (Urol), FEBU. Raj Persad, appointed in 1996, is a Consultant Urological Surgeon and Andrologist in Bristol. In his clinical role, he is one of the most experienced pelvic cancer surgeons in the UK and was one of the first in the UK to practice female neobladder reconstruction following cystectomy for invasive bladder cancer. He has subspecialised over many years in precise surgical techniques which improve both oncologic and functional outcomes. This includes techniques ranging from 1) the use of the Da Vinci Robot for performing Robot Assisted Laparoscopic Radical Prostatectomy, 2) High Intensity Focused Ultrasound for minimally invasive non-surgical treatment of prostate cancer and 3) Rectal Spacer and Fiducial Marker precision placement for optimizing the outcomes of Image Guided Radiotherapy for prostate cancer. Prof Persad has been a National pioneer in minimally invasive techniques for the treatment of Symptomatic Benign Prostatic as an alternative to Transurethral Prostatectomy (TURP). These techniques include Urolift (prostatic urethral lift) procedure which he does under general or local anaesthetic depending on patient preference as well as REZUM, steam treatment of the prostate. He also treats BPH with Green Light Laser. All these techniques are offered by Professor Persad for BPH as well as traditional TURP if tablet therapy has failed or cannot be tolerated by the patient. Academically, Prof Persad is involved in an extensive range of research with the Universities of Bristol, Pittsburgh, London and Oxford. These include the detection of early bladder and prostate cancer and novel imaging and treatment strategies for these diseases. He formerly led a team of researchers engaged in improving strategies for treatment of advanced prostate cancer in areas of hormonal treatment and immunotherapy (BPCRN). He has been Principal Investigator, Chief Investigator, and Collaborator in many National and International studies sponsored by the MRC, EORTC, CRUK, and NCRN.

Dr. David M. Albala graduated with a geology degree from Lafayette College in Easton, Pennsylvania. He completed his medical school training at Michigan State University and went on to complete his surgical residency at the Dartmouth-Hitchcock Medical Center. Following this, Dr. Albala was an endourology fellow at Washington University Medical Center under the direction of Ralph V. Clayman. He practiced at Loyola University Medical Center in Chicago and rose from the ranks of Instructor to full Professor in Urology and Radiology in eight years. After 10 years, he became a tenured Professor at Duke University Medical Center in North Carolina. At Duke, he was Co-Director of the Endourology fellowship and Director for the Center of Minimally Invasive and Robotic Urological Surgery. He has over 180 publications in peer-reviewed journals and has authored six books in endourology and general urology. He is the Editor-in-Chief of the Journal of Robotic Surgery. He serves on the editorial board for Medical Reviews in Urology, Current Opinions in Urology and Urology Index and Reviews. He serves as a reviewer for eight surgical journals.

Presently he is Chief of Urology at Crouse Hospital in Syracuse, New York and a physician at Associated Medical Professionals (a group of 32 urologists). He is considered a national and international authority in laparoscopic and robotic urological surgery and has been an active teacher in this area for over 20 years. His research and clinical interests have focused on robotic urological surgery. In addition, other clinical interests include minimally invasive treatment of benign prostatic hypertrophy (BPH) and the use of fibrin sealants in surgery. He has been a Visiting Professor at numerous institutions across the United States as well as overseas in countries such as India, China, Iceland, Germany, France, Japan, Brazil, Australia, and Singapore. In addition, he has done operative demonstrations in over 32 countries and 23 states. He has trained 16 fellows in endourology and advanced robotic surgery.

In addition, Dr. Albala is a past White House Fellow who acted as a special assistant to Federico Pena, Secretary of Transportation, on classified and unclassified public health related issues.Dr Karen Ventii is a Harvard-trained specialist in healthcare communications, with over 10 years of experience in oncology and urology. As a Visiting Fellow at Harvard University, she conducted independent research on evolving trends in continuing medical education, with the aim of diminishing the gap between evidence and practice.

Amit Bahl is Consultant Clinical Oncologist at Bristol Cancer Institute, University Hospitals Bristol with a special interest in breast and urological cancers. He is the research lead for Uro-oncology at Bristol Haematology and Oncology Centre. He has led and developed the prostate brachytherapy service at Bristol. He has been an expert adviser to NICE for the technology appraisal on new drugs and an external service reviewer at oncology departments elsewhere in the country. Prior to his current roles, Professor Bahl became Member of the Royal College of Physicians (UK) and trained in Clinical Oncology, achieving the Fellowship of the Royal College of Radiologists qualification. He has been awarded the fellowship of the Royal College of Physicians. He is a current member of the National Cancer Research Institute Clinical Studies penile cancer subgroup. He has been college tutor of the Royal College of Radiologists for ten years and has supervised several MD theses in breast and prostate cancer research. He has previously been in the NCRI Renal, Bladder and Prostate clinical studies group. He is an Executive Committee member of the British Uro-oncology group. Professor Bahl is actively involved in research into breast, prostate, bladder and penile cancers and has more than 100 publications in these research areas and has several presentations at national and international meetings. In 2012, Professor Bahl was awarded the Cochrane Shanks Jalil Professorship by the Royal College of Radiologists, London and he is Visiting Professor to 2 international centres and at University of West of England. He is currently holding research grants in excess of GBP2 million and is Chief Investigator for several multicentre trials which are focussing on new modalities of treatment in breast and prostate cancer and also is leading the robotic brachytherapy project.