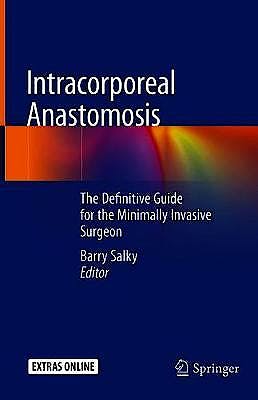 Intracorporeal Anastomosis. The Definitive Guide for the Minimally Invasive Surgeon

Laparoscopic and robotic approaches to colon, rectum and the small intestine have undergone radical change since the introduction of minimally invasive surgical techniques. At the beginning of this revolution, the most common anastomotic techniques have been extracorporeal. As a few surgeons became more familiar with minimally invasive suturing techniques, intracorporeal anastomosis became possible. However, the change from an extracorporeal approach has been slow to realization for the vast majority of surgeons. While there are multiple reasons for this slow adoption, the most common are perceived difficulty with suturing in a closed space, the feeling of lack of control, and the worry of increased infection in the abdomen. This book details the latest information in addressing and dispelling these fears. It provides a useful guide to techniques required to perform intracorporeal anastomoses both in laparoscopic and robotic surgery, and it shows the huge advantages to the patient, surgeon and to our health care system. Written by experts in the field, chapters serve as a definitive guide to the performance of intracorporeal techniques to all general and colon and rectal surgeons performing bowel resection both for benign and malignant disease. The chapters contain ample color photographs and videos describing each technique.
Intracorporeal Anastomosis primarily focuses on laparoscopic and robotic techniques and contains the latest published data describing the advantages of using these minimally invasive surgical techniques.