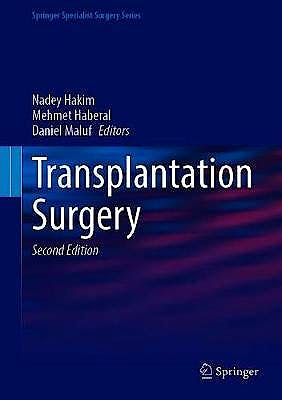 This updated volume gives a clear description of transplantation surgery and covers the recent developments and innovations that have occurred within the field. New chapters on the management of graft dysfunction, organ preservation, new immunosuppressive drugs, molecular medicine and transplantation, robotics in transplantation, and organ bio-engineering are included.

The book aims to be an authoritative guide to transplantation surgery that will help improve the likeliness of procedures being successful.

This book will be relevant to transplant surgeons, physicians, and nephrologists.

Nadey S Hakim, GCSJ, MD, PhD, FRCS, FRCSI, FACS, FICS(Hon), FASMBS, FIMSA(Hon), FRCS Glagow (Hon). Nadey S. Hakim is a transplant surgeon and author. With over 30 years as a surgeon, Hakim has performed over 2,500 transplants. Hakim received his MD from Paris Descartes University in 1984 and was Laureate of the Faculty of Medicine of Paris. He did his surgical training at Guy's Hospital, and received his PhD in small bowel transplantation from University College London. His Gastrointestinal Fellowship was at the Mayo Clinic and his Multi-organ Transplant Fellowship was at the University of Minnesota. Hakim began the first Pancreas Transplant Program in South East England performing the first pancreas transplant in London at St Mary's Hospital in 1995. The world's first hand transplant was performed in September 1998 by a team of surgeons including Hakim,Hakim also took part in the first double arm transplant. He was awarded Honorary Professorships from Lyon University (2005), Ricardo Palma University, Baskent University, University of Sao Paulo (2007), University of Belgrade (2018) and was visiting professor at several institutions worldwide including Harvard University and the Cleveland Clinic. Hakim was the first recipient of the Max Thorek Professorship of Surgery. He is currently Adjunct Professor of Transplantation Surgery at Imperial College London. Hakim was surgical director of the West London Renal and Transplant Centre at Imperial College Healthcare NHS Trust (1995-2015). Governor of the American College of Surgeons, Counsellor (Europe) of the Transplantation Society (TTS). He was awarded the French Legion d'Honneur in 2018 and has become a Member of the prestigious Academie Francaise de Chirurgie.

Mehmet Haberal was born in 1944 in Rize, Turkey. Received his medical degree in 1967 from Ankara University Medical School and completed his General Surgery residency at Hacettepe University in Ankara, Turkey.

In 1993, he founded Baskent University in Ankara, Turkey. He established hospitals, dialysis centers, rehabilitation centers, and foundations throughout the country.

His Majesty King Felipe VI, King of Spain, bestowed upon him the award of The Spanish Order of the Civil Merit (Cruz de Official) in recognition to the professional career of Professor Haberal in the fields of Medicine and Education.

Professor Haberal is the President of The Transplantation Society for the term of 2018-2020.