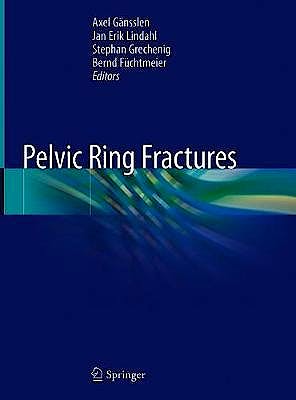 This book provides in-depth coverage of all aspects of pelvic ring fractures and their management. The opening chapters supply essential information on surgical anatomy, biomechanics, classification, clinical evaluation, radiological diagnostics, and emergency and acute management. The various operative techniques, including navigation techniques, that have been established and standardized over the past two decades are then presented in a step-by-step approach. Readers will find guidance on surgical indications, choice of approaches, reduction and fixation strategies, complication management, and optimization of long-term results. Specific treatment concepts are described for age-specific fractures, including pediatric and geriatric injuries, and secondary reconstructions.

Pelvic ring fractures represent challenging injuries, especially when they present with concomitant hemodynamic instability. This book will help trauma and orthopaedic surgeons at all levels of experience to achieve the primary treatment aim of anatomic restoration of the bony pelvis to preserve biomechanical stability and avoid malunion with resulting clinical impairments.

Axel Gansslen, MD, is a Consultant in Trauma Surgery in the Trauma Department, Wolfsburg General Hospital Wolfsburg, Germany. Since 2012 he has also been Chairman of the AO Trauma Course - Pelvis and Acetabulum in the Department of Anatomy, University of Graz, Austria. Dr. Gansslen graduated from Hannover Medical School (MHH) in 1993 and subsequently undertook a number of residencies in trauma surgery before becoming a Consultant in Trauma Surgery in the Trauma Department of Hannover Medical School in 2006. Since 1994 he has been Regional/International Faculty on more than 100 AOTrauma Courses. He is the author of numerous papers in peer-reviewed journals as well as five books and more than 50 book chapters.

Jan Erik Lindahl, MD, PhD, is Head of the Pelvis and Lower Extremity Orthopaedic and Trauma Surgery Ward at Helsinki University Hospital and Adjunct Professor (Docent) in Orthopaedics and Traumatology at the University of Helsinki, Finland. He graduated from the University of Tampere in 1986 and subsequently completed specializations in Orthopaedics and Traumatology and General Surgery at the University of Helsinki before taking up his current post in 2000. Dr. Lindahl has been chairman of AOTrauma Finland since 2010 and is a past president of the Finnish Trauma Association, of which he was a founding member. He has received various awards, including the Hughston Award for best paper published in the American Journal of Sports Medicine in 2006. He is the author of almost 50 original articles and more than 30 book chapters, predominantly on management of injuries of the pelvic ring and acetabulum, fractures of the lower extremities, and knee injuries.

Stephan Grechenig, MD, Priv. Doz. Dr. med. univ., is a resident in Orthopaedic and Trauma Surgery at the Clinic for Trauma Surgery, Orthopaedics and Sports Medicine, Krankenhaus Barmherzige Bruder, Regensburg, Germany. He graduated from Medical School at the University of Graz, Austria in 2013 and subsequently was a post-doc in Musculoskeletal Biomechanics at the AO Research Institute, Davos, Switzerland and a resident in Trauma Surgery at the University Medical Center, Regensburg, Germany. He is a member of AOTrauma, the AO Faculty Group, and the German Society for Trauma Surgery (DGU) and is the author of almost 50 PubMed-listed articles.

Bernd Fuchtmeier, MD, is Head of the Department for Trauma and Orthopaedic Surgery at the Krankenhaus Barmherzige Bruder, Regensburg, Germany. After graduating from Medical School in Hannover, he undertook extensive training in orthopaedic surgery. Dr. Fuchtmeier was appointed as a consultant in the Department of Traumatology, Regensburg University Clinic in 2001 and subsequently became Head of the Section of Pelvic Surgery and Arthroplasty. He gained his habilitation in trauma surgery in 2007. In 2008 he was appointed senior consultant in the Clinic for Trauma Surgery, Orthopaedics, and Sports Medicine at Krankenhaus Barmherzige Bruder. Prior to taking up his current position, he was a consultant at the Center for Musculoskeletal Surgery, Charite University Clinic, Berlin. In 2011 Dr. Fuchtmeier was appointed Associated Professor in the Medical Faculty, University of Regensburg. He is a member of the Advisory Board for AO Trauma Germany.