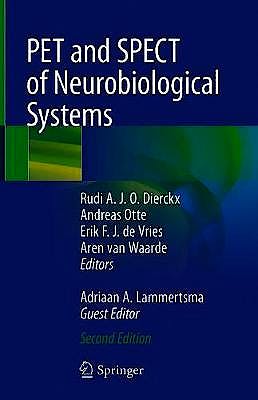 PET and SPECT of Neurobiological Systems

This book, now in a fully updated second edition, is a comprehensive and up-to-date guide to the use of PET and SPECT for the imaging of neurobiological systems. Diverse aspects of neurotransmission in the brain are discussed, such as visualization and quantification of neuroreceptors, neuroinflammatory markers, transporters, and enzymes as well as neurotransmitter synthesis, -amyloid deposition, cerebral blood flow, and the metabolic rate of glucose. The latest results in probe development are also detailed. A wide range of systems not addressed in the first edition are covered, reflecting the advances made in recent years. The book combines the expertise of authors internationally renowned for their dedication to the development of novel probes and techniques for the investigation of neurobiological systems. Most chapters are written jointly by radiochemists and nuclear medicine specialists to ensure a multidisciplinary approach. This state of the art compendium will be valuable to all with an interest in clinical and preclinical neuroscience. Companion volumes on the use of PET and SPECT in neurology and psychiatry complete a trilogy.

Rudi Dierckx studied medicine and neuropsychiatry at the Free University of Brussels. He was trained as a nuclear medicine physician at the University of Antwerp (1988-1994). Rudi has headed the Department of Nuclear Medicine at the University Hospital of Ghent (Belgium) from 1994 to 2004, and has acquired a Master of Business Administration (MBA) at the Vlerick School of Management in Leuven (2004, cum laude). Since 2005 he is Head of the Department of Nuclear Medicine and Molecular Imaging at University Medical Center Groningen (UMCG) in The Netherlands. Since 2013, he is also Head of the Medical Imaging Center, and Chairman ad interim of the Department of Radiology at UMCG. His primary research interests are PET studies of the human brain.

Andreas Otte, MD, is a board-certified specialist in Nuclear Medicine and Professor of Biomedical Engineering in the Division of Medical Engineering, Department of Electrical Engineering, Medical Engineering and Computer Science, Offenburg University, Germany. Prof. Otte received his graduate and post-graduate medical education at the University Hospitals Freiburg, Germany, and Basle, Switzerland, and at the Paul Scherrer Research Institute in Villigen, Switzerland. Thereafter he held various leading positions in clinical research with Pfizer in Freiburg, Germany (International Medical Research, Pfizer Global Pharmaceuticals) and at the University Hospital Freiburg. From 2002 to 2009 he was Visiting Professor of Nuclear Medicine in the Medical Faculty of the University of Ghent in Belgium. He took up his present position in 2010. Andreas Otte is the author of many peer-reviewed journal articles and the author or editor/co-editor of a number of books. His research focus is on neurosciences including functional neuroimaging, brain-machine-interfaces, and intelligent neuroprosthetics. Awarded a series of international scientific prizes, he was nominated Editor of the Board of the European Journal of Nuclear Medicine (1998-2003) and the Hellenic Journal of Nuclear Medicine (since 2003).

Erik de Vries graduated in chemistry (cum laude) at the University of Leiden (The Netherlands) in 1991 and obtained his PhD in natural sciences at the same university in 1995. After a short project as a chemist at the pharmaceutical company Gist-Brocades in Delft, the Netherlands, he moved to the University Medical Center Groningen in 1996, where he is still working as a Professor at the Department of Nuclear Medicine and Molecular Imaging. Since 2007, he is the research coordinator of this department. Erik was also guest lecturer in molecular and diagnostic imaging at the University Sapienza in Rome, Italy from 2007 to 2013. He has a special interest in the development and application of radiopharmaceuticals for PET imaging of inflammation and tumor drug targets.

Aren van Waarde studied animal physiology and received a PhD degree from Leiden University in the Netherlands. He worked as a postdoctoral research associate in the Department of Molecular Biophysics and Biochemistry at Yale University (1986-1988). After his return from the US, he was appointed in Leiden as a Fellow of the Royal Dutch Academy of Sciences and worked on in vivo NMR spectroscopy of aquatic animals. For this research he received an award (C.J.Kok prize, Leiden University). Since 1991 he is a member of the permanent staff of the Department of Nuclear Medicine and Molecular Imaging (formerly: PET Center) at the University Medical Center Groningen (Netherlands), and is involved in the preclinical evaluation of novel radiopharmaceuticals. His primary research interests are PET studies of receptors in the brain and the use of PET to examine the mechanism(s) of action of CNS drugs.

Adriaan A. Lammertsma is Emeritus professor at the Department of Radiology and Nuclear Medicine, Amsterdam University Medical Centres, location VUmc in Amsterdam. He has been active in PET research since 1979, when he joined the MRC Cyclotron Unit at Hammersmith Hospital in London. Apart from a sabbatical year at UCLA, Los Angeles, he stayed in London until 1996, when he moved to Amsterdam. Over the years his research focus has been the development and application of tracer kinetic models for quantitative PET studies. He has worked on applications in neurology, cardiology, and oncology. In addition, he was one of the first to recognize the value of PET in both drug development and personalized treatment. He was the 2012 recipient of the Kuhl-Lassen Award from the Society of Nuclear Medicine and the 2015 recipient of the ESMI Award from the European Society of Molecular Imaging. Since March 2020, he has a formal (part-time) appointment as advisor at the UMCG (Groningen). In addition, he is a visiting professor of the University Hospital of the University of Copenhagen.