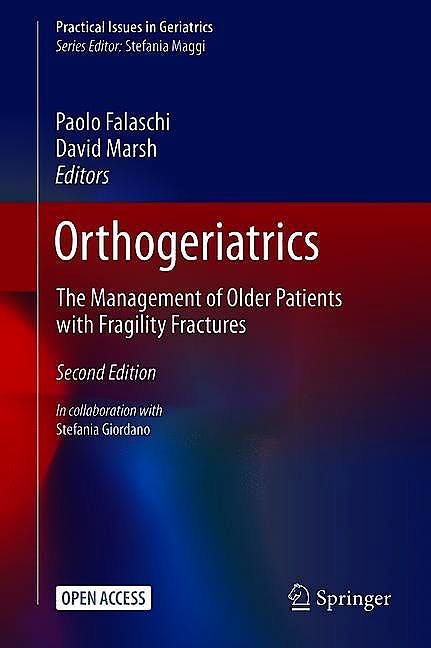 1 The multidisciplinary approach to fragility fractures around the world.- 2 Epidemiology of hip fracture and social costs.-3 Osteoporosis in the elderly patient.- 4 Frailty, sarcopenia, falls and fractures.- 5 Establishing an Orthogeriatric service.- 6 Multi Professional Team: Coordination and Communication.- 7 Hip Fracture in the Emergency Room.- 8 Pre-Operative Management.- 9 Hip Fracture: The Choice of Surgery.- 10.- Orthogeriatric anaesthesia.- 11 Post-operative management.- 12 The role of nursing.- 13 Rehabilitation Following Hip Fracture.- 14 Fracture Risk Assessment and how to implement a Fracture Liaison Service.- 15 Current and Emerging Treatment of Osteoporosis.- 16 How can we prevent falls?.- 17 The importance of Hip Fracture Audit.- 18 The Psychological Health of Patients and their Caregivers.

This new Open Access edition supported by the Fragility Fracture Network aims at giving the widest possible dissemination on fragility fracture (especially hip fracture) management and notably in countries where this expertise is sorely needed. It has been extensively revised and updated by the experts of this network to provide a unique and reliable content in one single volume.

Throughout the book, attention is given to the difficult question of how to provide best practice in countries where the discipline of geriatric medicine is not well established and resources for secondary prevention are scarce. The revised and updated chapters on the epidemiology of hip fractures, osteoporosis, sarcopenia, surgery, anaesthesia, medical management of frailty, peri-operative complications, rehabilitation and nursing are supplemented by six new chapters. These include an overview of the multidisciplinary approach to fragility fractures and new contributions on pre-hospital care, treatment in the emergency room, falls prevention, nutrition and systems for audit. The reader will have an exhaustive overview and will gain essential, practical knowledge on how best to manage fractures in elderly patients and how to develop clinical systems that do so reliably.

Paolo Falaschi was awarded a First Class Honours Degree in Medicine and Surgery in 1972, and he received Postgraduate Higher Medical Diplomas in Endocrinology and Pathology in 1975 and 1976 respectively. He was a Visiting Fellow at the Department of Endocrinology, St. Bartholomew's Hospital, London before completing a Postgraduate Course in Endocrinology at the University of London in 1977. From 1980 to 1981 he was a Visiting Assistant Professor at the Department of Medicine, Mount Sinai Hospital, New York, USA. From 1974 a 1988 he was researcher at Rome's "Sapienza" State University, and till 1999 he was an Associate Professor of Internal Medicine at Naples Federico II University.

From 2004 to 2017 he was coordinator of the Integrated Medico-Surgical and Geriatrics Course in Medicine and Surgery at the Faculty of Medicine and Psychology at "Sapienza" University. Further, he was the Director of the Master's Course in Case Management within the integrated network of services to the elderly; President of the Nursing Course at Rome's "Sapienza" University (from 2000 to 2010); and Vice-president of the degree course in Medicine and Surgery at the Medical Faculty of the same University (between 2000 and 2008). He has coordinated numerous research projects in the field of clinical geriatrics and published more than 500 papers in peer-review journals. He has now retired from clinical and university roles but is actively involved in the field of osteoporosis and fragility fractures. He is past president and chair of education committee of the Fragility Fracture Network.

His research interests focused on the biology of fracture healing and distraction osteogenesis; tissue engineering of bone; treatment of osteoporosis and fragility fractures; clinical trials of fracture treatment; and measurement of outcome in fractures and limb reconstruction. He led the establishment of the UK National Hip Fracture Database and was awarded an Honorary Fellowship by both the British Orthopaedic Association and the Orthopaedic Trauma Society in recognition of this work. He has now retired from clinical and university roles, but remains active in the field of fragility fractures. He was the founding President of the Fragility Fracture Network and remains internationally active in that organization.