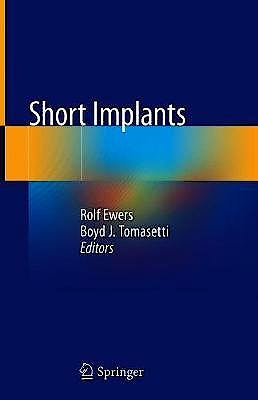 This comprehensive guide to short implants will take the reader through their research and development, explain the clinical indications, evaluate the outcomes achieved with various implants, and explore restorative and laboratory considerations. Short implants have steadily gained greater market share in the last decade as practitioners sought alternatives to traditional length implants in order to avoid grafting procedures. Current manufacturers offer a variety of implant lengths and widths, allowing surgeons and restorative dentists the ability to select the best implant for each clinical circumstance. Cutting edge information is provided on the research and clinical results achieved utilizing a range of implants, specifically those developed by Nobel Biocare, Straumann, Jack Hahn, and Bicon. Readers will also find an extensive description of the role of ultra-short implants involving reconstruction in both cleft patients and cancer patients who have lost portions of their mandible and/or maxilla. This book is a must-have for those interested in learning how the use of short and ultra-short implants offers both surgeons and restorative dentists an opportunity to stand out from those that use only the traditional length implants.

Rolf Ewers, MD, DMD, PhD, is Chairman of the CMF Institute for Cranio-Maxillofacial and Oral Rehabilitation, Navigation Surgery and Telemedicine in Vienna, Austria. He has held this position since 1994 and in September 2012 was appointed Emeritus of the University Hospital for Cranio-Maxillofacial and Oral Surgery of the Medical University of Vienna. Dr. Ewers has been the recipient of many awards and honors. In 2005 he chaired the 17th International Conference on Oral & Maxillofacial Surgery at the Hofburg Congress Center in Vienna and in the same year received an Oral and Maxillofacial Surgery Foundation Research Recognition Award 2005 from the American Association of Oral and Maxillofacial Surgery. In 2006 he became President of the Camlog Foundation and Camlog Academy (he is now Honorary President of both) and in 2009 received an Honorary Fellowship from the American Association of Oral and Maxillofacial Surgeons. He has been a member of the editorial boards of 11 national and international peer-reviewed journals and has published very extensively in leading journals.