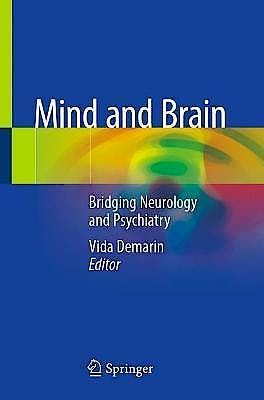 1. Creativity - the story continues An overview of thoughts on creativity.- 2. Artificial Intelligence and Brain Health.- 3. Neuropsychoanalysis - gluing the bits together again.- 4. Beyond Mind & Body.- 5. Psychiatric disorders in neurological diseases.- 6. Primary headache from a psychological point of view.- 7. An update on psychoimmunology aspects in severe mental disorders.- 8. Huntington's Disease.- 9. Non-motor symptoms in Parkinson's disease.

This book discusses the link between the brain and the mind. Adopting an evidence-based neuropsychiatry approach while also touching on philosophical aspects, it examines the association between diseases of the brain and mental health, offering comprehensive insights into the emerging new discipline of psychoneuroendocrinoimmunology and its translation to clinical practice. The book particularly focuses on brain plasticity and on explaining the ability of the brain to learn new pathways in everyday situations and at the same time improve creativity.

Written by clinicians and leading experts in the field of brain physiology and pathology, this book is a valuable resource for medical professionals and postgraduate students.

Vida Demarin, MD, Ph.D., graduated from the School of Medicine, University of Zagreb, Croatia. She completed her residency in neuropsychiatry at the University Hospital Centre "Sestre milosrdnice", Zagreb, Croatia. She was Head of the Department of Clinical Neurology and Centre for Neurological Sciences and Brain Research at the University Hospital Centre "Sestre Milosrdnice" (1994-2012), Medical Director of the Medical Centre Aviva (2012-2015), and has been the Director of International Institute for Brain Health since 2015. She has authored over 200 articles in national and international journals, and organized and participated in numerous symposia, seminars, conferences and congresses.

Professor Demarin's fields of interest include stroke prevention and management, neurorehabilitation, neurodegenerative disorders and dementia, management of headache and migraine, neuroplasticity and neuropathic pain, and she has been the principal investigator of various research projects. She is a pioneer of neurosonology in Croatia and the founder of Summer Stroke School - Healthy Lifestyle and Prevention of Stroke and Other Brain Impairments, which has been held in Dubrovnik, Croatia, since 1990.

She has developed intensive collaborations with colleagues from around the globe, especially Central and Eastern European countries, in order to spread knowledge and skills and share ideas. She participated as a lecturer at several ESO Summer Schools as well as at several RTCs.