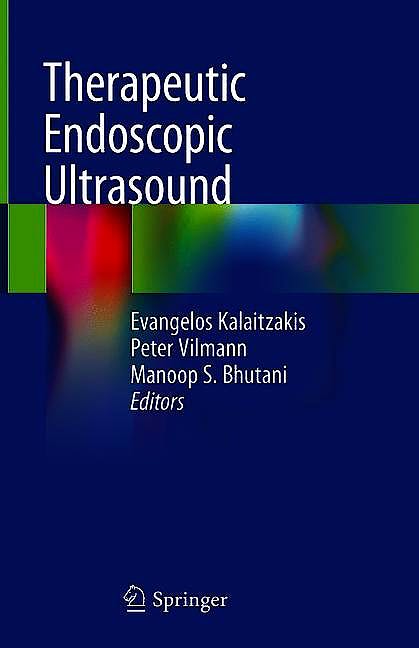 This book provides an up-to-date review of therapeutic EUS with an equal focus on technical descriptions with ample endoscopic images/video clips by world experts and the scientific evidence behind the described techniques. The book provides an overview of the field in a structured manner, starting with general topics on equipment and service development and extending to the fields of EUS-guided drainage, anti-tumor therapies, and other specific EUS-guided interventional treatments.

Peter Vilmann. Peter Vilmann started as an international recognized pioneer on EUS with linear transducers, as well as a variety of EUS-guided diagnostic and therapeutic interventions. He was the first to perform EUS-guided fine needle biopsy (1991) and the inventor of the first needle assembly for EUS-guided aspiration biopsy. During the years he has published more than 200 publications accepted in peer/reviewed international medical journals, as well as more than 34 medical books or chapters as author or co-author. Prof. Vilmann holds a full clinical professorship at Copenhagen University. Present research interests include advanced endoscopy techniques in general, but also further work in the field of EUS and EUS-guided biopsy, diagnostic (including elastography and contrast enhancement) and therapeutic EUS procedures. He has been given several awards and holds an honorary title (Doctor Honoris Causa), at the University of Medicine and Pharmacy of Craiova, in Romania 2009. During the years he has been part of various international committees, including the International Committee of the ASGE, the Guideline Committee of ESGE and recently appointed to the International Affairs Committee of the ESGE. Further he is an editorial board member of several medical journals ie, Scandinavian Journal of Gastroenterology, Endoscopy, Visible Human Journal of Endoscopy (VHJOE), Video Journal and Encyclopedia of GI Endoscopy VIJGIE, and Endoscopic Ultrasound.

Manoop S. Bhutani,MD,FASGE,FACG,FACP,AGAF. Professor Bhutani is a Distinguished Professor and Director of Endoscopic Research and Development at MD Anderson Cancer Center which is consistently rated as the number one cancer center in the United States and worldwide. His major research interests pertain to gastrointestinal endoscopy and endoscopic ultrasound including interventional endosonography, utility of endoscopic ultrasound for gastrointestinal cancers, role of endoscopic ultrasound in evaluation of pancreatic tumors and pancreatic masses, endoscopic ultrasound for cancer staging, experimental studies using endoscopic ultrasound and endoscopy for image guided targeted drug delivery and development of new imaging modalities for gastrointestinal tract and cancers. He is regarded as a leading expert nationally and internationally in the field of gastrointestinal endoscopy, and specifically in the field of endoscopic ultrasonography. He has been invited for key note speeches and state-of-the art lectures in various national and international meetings. He has served as an expert invited speaker and/or live endoscopic workshop faculty around the world including the countries of Brazil, Spain, Germany, Romania, Israel, Egypt, and India. He has more than 250 publications, with 180 of them as original peer reviewed articles, with others as editorial, invited reviews and other articles. He also has 200 abstracts and scientific presentations at various national and international scientific meetings to his credit. He has served or is serving as principal investigator or a collaborator in more than 30 human, laboratory or animal research protocols at MD Anderson. He is a member of many editorial boards of various journals and Associate Editor of the journal Endoscopic Ultrasound. In 2008 he received the Eminent Scientist of the Year Award in Endoscopy. In summary, Professor Bhutani is considered a leading expert in the world in the field of endoscopic ultrasonography.